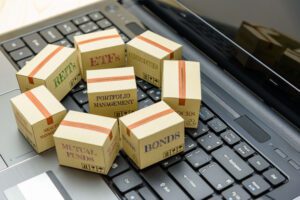 The world of stocks and bonds has invaded the average household over the last 40 years, and the 401(k) is to blame.  Investing in the capital markets was long the territory of the Country Club set, but the shifting of investing responsibility onto the workers, largely in the form of defined contribution plans like 401(k)s) made the average Joe into a (somewhat reluctant) investor.

Not surprisingly, during the period of the 1980s, as individuals became more and more responsible for their own investing, the demand for (and supply of) mutual funds grew substantially.

Mutual funds weren’t completely new.  Many texts trace them back to Dutch sailing firms who brought together investors to underwrite and insure expeditions back in the 18th century.  The first mutual fund in the United States was the Massachusetts Investors Trust, started in 1924.  You can actually visit the MFS headquarters in Boston and see the first ledger for the Massachusetts Investors Trust on display in the reception area.

The big growth in the mutual funds business stemmed both from the increasing demand for diversified investment vehicles, and from the fact that stock brokers could sell these to their customers for a fairly hefty commission.  7 to 8 percent ‘sales loads’ were charged on top of the net asset value of a fund.

As the industry matured and brokers started to share the space with registered investment advisors, a new breed of ‘no-load’, commission-free funds came onto the scene.  These were used by both ‘do-it-yourself’ investors and investment advisors who charge fees instead of collecting commissions.

The attractiveness of these pooled investment vehicles is largely two-fold.  First, in order to truly diversify a portfolio, a significant number of companies need to be added.  Buying dozens of stocks and bonds into an investment portfolio and paying all of the transaction costs, for most ‘normally sized’ investors, would be significant, whereas taking a small part of an already diversified pool of assets would be more manageable.  Additionally, managers with large research budgets and staffs would arguably be better at selecting the investments for the fund than would the average Jane.

By the time I entered the industry, there was a large and widely varied universe of mutual funds to choose from.  Funds that invested entirely in stocks or entirely in bonds, those that invested in one country’s stocks or bonds or another’s, and those that invested in a wide range of different investment types, making them potentially appropriate for one-stop shopping.  Investors had a wide range of choices both in the form of loaded funds (bought from their broker) or no-load funds (purchased directly or by an advisor).  Active strategies, where stocks are picked, bought and sold, were the most popular, but the practice of indexing, where stocks are selected based upon an index, was making waves.  Vanguard’s S&P 500 index fund was gradually becoming the most popular such fund, but there were hundreds to choose from.

Investors had it all.  We thought so, anyway.  But around came a new breed of investments, called Exchange-Traded Funds (ETFs), which started to flourish in the early 2000s.

ETFs were interesting in a few ways.  First, most early ETFs were unmanaged, indexed securities, meant to either gain broad market exposure or, in a lot of cases, to focus on one specific industry sector.

Secondly, ETFs, while set up under the Investment Company Act of 1940 (just like mutual funds), were traded as individual securities.  That meant that some brokers who were registered to sell mutual funds but not individual stocks were out of the game.  Probably because of that, it took a little while for ETFs to take off.

They’ve become very popular since.  The early 2000’s saw about $100 Billion in ETFs, while current usage is at upward of $4 Trillion.

At the end of the day, though, a frequent question is:  Why choose an ETF instead of a mutual fund?  They’re both pools of investments, and both have similar opportunities to expose the investor to specific parts of the market.  Truth is, there are sometimes situations where a mutual fund is more appropriate, and there are others where ETFs fit the bill.

While they have their differences, ETFs and mutual funds play largely in the same pools for investors now.  Since ETFs have some of the same properties as individual stocks, they can be traded using strategies such as stop-losses and limit orders, and thus have garnered the attention of professional investors.  Actively managed mutual funds are still the largest segment in the investment company world, but ETFs are likely to catch up and surpass them at some point.

Who knows what the new thing will be by the time I retire (which may be nearer than my start date in the industry)?