A Tale of Tax Efficient Investing 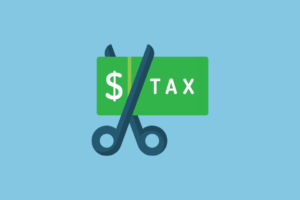 This is the story of two friends. Let’s call them “Hannah” and “Julie.” Hannah and Julie are like peas in a pod. They listen to the same kind of music, they dress alike, they even invest alike. As a matter of fact, they have the same exact investment portfolio. Both of them have 100 shares of XYZ stock, and both of them have 10 bonds issued by ABC company.

But here’s the thing. Later this year, when they sell their investment portfolios, Julie ends up with a significantly larger amount of money after taxes than Hannah does. This is despite the fact that Julie and Hannah are both (as you may expect) at the same exact tax bracket.

So how did Julie manage to beat Hannah?  Before we get to the specifics, let’s review two things: the ‘magic’ of tax deferral, and a wonderful thing known as capital gains taxation.

THE MAGIC OF TAX DEFERRAL

Generally, deferring taxes is a good thing.  Let’s say I have an investment that returns $1,000 per year. If I am in the 25% tax bracket, and have to pay taxes each year that thousand dollars, I’ll be left owing $250 per year in taxes.  If I hold this investment in a tax deferred account, I get to hold onto that $250, and it continues to earn interest for me. If I’m not in a tax-deferred account, the interest that $250 is gone, since I had to use it to pay taxes. So, tax deferral, which can be obtained in a lot of ways, like through employer retirement plans and IRAs, can be helpful, especially with investments that pay a lot of interest.

THE WONDER OF CAPITAL GAINS TAXATION

Capital gains taxation is another effective tool for minimizing taxes. If I own an investment, hold it for a certain period of time and sell it for a profit, the growth of that investment is considered taxable income. But it’s not taxed at my normal income tax rate. Rather, the gain is taxed at special capital gains tax rates, which are significantly lower than income tax rates. And as an investment appreciates in value while I hold it, generally no taxes are due until the investment is sold.

So what happened with Hannah is that she held her bond in a TAXABLE account. As a result, her bond interest payments were not deferred, and she had to pay taxes instead of letting the tax money grow deferred. Hannah also had an IRA, and that’s where she held her stock. The stock appreciated in value just like Julie’s did, but when she sold it, she did not get a chance to benefit from capital gains tax treatment. This is because a tax-deferred account, while it defers taxes, always ends up getting taxed at the income tax rate – NOT the capital gains tax rate. 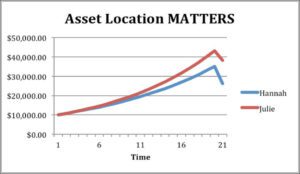 Julie also had a taxable account and an IRA. But what she did was the exact opposite of Hannah. She held the income-producing bond in a tax-deferred account, and held the stock and her taxable account. As such, she was able to take full advantage of both the tax deferral of the income, and the capital gains tax treatment of the growth of the stock.  If we assume a 5% bond interest rate, an 8% stock growth rate, and 25% income tax bracket for both, Julie’s after-tax returns work out to an annualized rate of more than 2% higher than Hannah’s!

In fact, if Julie decided not to sell the stock, and instead left it as a bequest for her kids, they would inherit the stock completely tax-free. This is because capital gains assets are assigned what is called a ‘step up’ in cost basis at death. Hannah’s kids, however, would have to pay income taxes on the amount that they received from the stock.  Because it was held in a tax-deferred plan, no increase in cost basis applies.

In the industry, we refer to this as “asset location.”  In reality, it’s often difficult to hold each investment in the most tax-efficient type of account.  All investments will be held in a tax-deferred retirement plan if that’s the only account with money.  And at the end of the day, asset ALLOCATION is more important than asset LOCATION.  However, for those investors with multiple types of investment accounts, the location of those assets makes enough difference that it can’t be ignored.