Finally, the Definitive Answer to: “Is it Better to Buy a House, or Rent?” 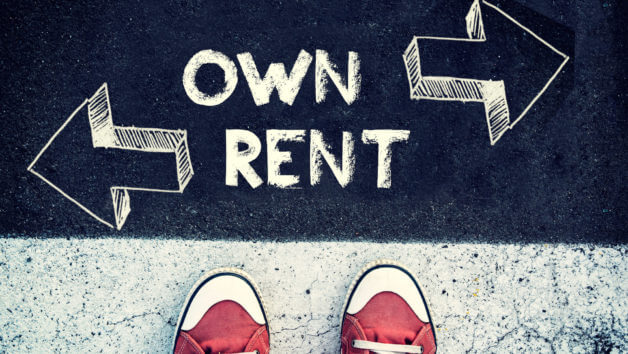 “It ain’t what you don’t know that gets you in trouble.

It’s what you know that just ain’t so.”

(Unknown: Not Mark Twain, although frequently attributed to him)

There’s perhaps no more the longstanding piece of conventional wisdom in personal finance:  “Don’t throw your money away at rent.  Buy a house and start building some equity!”  For many years, this has been advice rendered and taken purely at face value.  Only recently, a growing choir of audacious columnists, bloggers and talking heads has taken aim at this old chestnut by extolling the virtues (financial and otherwise) of RENTING.

It might not come as a surprise, but Millennials own at a lower rate, and rent at a higher rate, than previous generations (although a relatively stable percentage across these generations have occupied housing owned by their parents – roughly 4%).

From a purely financial standpoint, there are some benefits to owning.  One is that mortgage costs are largely fixed (although other components of homeownership, like taxes and insurance, are often paid with the mortgage payment and usually go up over time).  There are also financial benefits to renting, including not having to carry as much in maintenance reserves and not having to come up with a big down payment out of pocket.

In order to compare a purchase versus renting scenario, it’s necessary to account for the cash flow differences between the two.  Basically, after totaling up all of the outflows, it’s assumed that the difference between the monthly cost of owning and the monthly cost of renting is invested.  By purchasing a house, you have a potentially big real estate asset to sell at the end – but by renting, you can project having money that you don’t have as an owner.  We account for this savings from having no down payment and from potentially lower monthly costs. We’ll call this “Opportunity Investment”.

Taking account of the ‘terminal’ values of each (the real estate’s liquidation value and the after-tax “Opportunity Investment”), we can get a sense of which strategy works better over time.  As might be expected, really cheap rentals of high value properties end up with that Opportunity Investment being large – frequently exceeding the real estate liquidation value, especially in the early years.  Less expensive houses in higher rent areas result in the complete opposite, although they may take a few years of lagging behind the rental results.

The point is that there is no easy answer, financially.  A rental decision may be the best solution in the short-term, but not in the long run.  Or, it may be best to rent in the long run as well.  It’s important to take all of that into account.

But, there are a lot of other factors to consider when making the rent-buy decision.  Anyone who has ever been through a home sale knows that it’s a laborious, time-consuming process.  If you’re likely to be moving often (and don’t have a company who is willing to buy your house should you need to sell quickly), then renting may very well make more sense.  Ditto if you simply don’t want to absorb the uncertainty and work that comes with maintenance issues on a house.  A ‘newer couple’ might consider renting for a period of time while they decide what the ‘long-term’ will look like.  It’s way easier to terminate a lease if things don’t work out, than to go through the intricacies of selling a home.  Then there are folks who simply want to focus on other items than which washer-dryer to purchase, or when it’s time to re-shingle the roof.

On the other hand, there are plenty of good, non-financial reasons to own a home.  It’s really nice not to have to get clearance from anyone (except maybe the insurance company) before you decide to bring a pet into the house!   Also, the “Opportunity Investment” from the prior example is contingent on a renter actually MAKING THAT INVESTMENT!  For some, if they wouldn’t otherwise be disciplined enough to put that money aside for longer-term objectives, buying a house can actually serve as a ‘forced savings’.  Certainly, the mortgage company will be providing some “accountability “ if you miss a month.

It’s not surprising that in today’s more mobile society, rentals are increasing among the younger generations relative to home ownership.  Similar trends are taking place around other things, like cars.  But, at the end of the day, this may not be a bad thing.  And, if you haven’t yet figured it out, the definitive answer to whether it’s better to rent or buy is… IT DEPENDS.