IRS Tools: the CARROT and the STICK 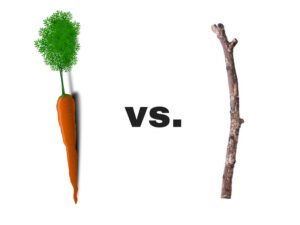 Tax policy is clearly just as much a social engineering tool as it is a revenue source.  When you think of it, this makes perfect sense and is something we should probably applaud.  By driving us to be healthier (by assessing outsized taxes on cigarettes, junk food, and fossil fuels), the government is arguably reducing the amount of total taxation, by reducing the health and environmental impact associated with these items – as well as the attendant costs of care and remediation that would likely fall on the government to provide.  The premise is, obviously, that people utilize these items less if they’re taxed more.

And even as this system of ‘sticks’ is used to discourage destructive (and ultimately costly) behavior, there are ‘carrots’ that taxing authorities use to encourage certain behaviors.  Tax credits and deductions for everything from purchasing electric vehicles to sending kids to college are prime examples.

The IRS is also very interested in encouraging people to save for retirement.  It doesn’t take too much imagination to figure out why.  People who save for retirement are less dependent on tax-funded social programs for their health, maintenance and support.  Needless to say, they provide some ‘carrots’ to lure people into the good behavior of saving for retirement – but they’re at the ready with a number of ‘sticks’ as well to make sure the carrots aren’t abused!

With retirement savings, and a large number of other things, the secret is to maximize the ‘carrots’, while avoiding the ‘sticks’.  This often takes careful planning, but that’s why we’re here!