Live in Maine? Have some free money! 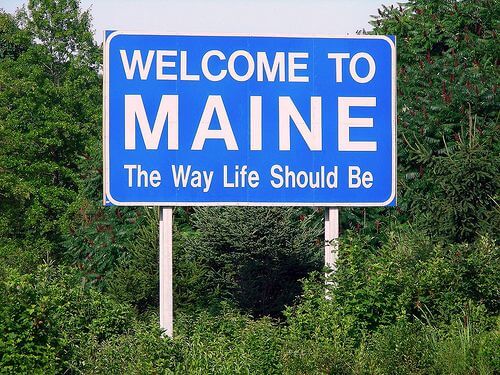 As I write this blog, it’s sunny, dry and 73 degrees.  There’s a slight breeze.  This is, I believe, the best possible meteorological condition for human existence.  Extremely liveable.

Of course, as anyone living in Maine is well aware, this kind of day is the exception to the rule.  Generally, Maine’s weather can be counted upon to be far from shirt-sleeve comfortable for a good part of the year.  Last week, it was temps in the 90’s with oppressive humidity and, well, let’s not even talk about what it will be like six months from now.

This may be one of the reasons why Maine’s population has (at best) plateaued over the last few years.  Aroostook County, like many Maine rural areas, had a higher population in 1918 than it does in 2018.

Yet, given the fact that we deal with long, difficult winters, followed by mud season, black fly season, killer frosts in May, and then ‘tourist season’, there are those of us (present company included) who fall in love with the state and wouldn’t dream of leaving.  The state’s rugged beauty and surprisingly warm and delightful people do much to at least attract as many people as the siren call of other states lures away.

But there’s another, potentially more tangible benefit to being a resident of the state of Maine:  Free money for college savers.

This story goes back to March of 1934, when a high school graduate by the name of Harold Alfond got a job in a shoe factory where his father worked.  Working his way up the ranks, eventually Alfond purchased a mill in Dexter to start producing shoes.  The Dexter Shoe Company did reasonably well, to say the least, and in 1993 Dexter sold out to Warren Buffet (in a deal Buffet would eventually refer to as ‘the worst deal he’d made’) for $433 Million.

Alfond had a long history of philanthropic leanings, going back as far as 1950, when he started the Harold Alfond Foundation.  Interestingly, the Foundation largely focused its grants on higher education institutions (where Alfond had not advanced beyond high school).

Most notable of Alfond’s donations:  the Alfond Scholarship Foundation was created in 2008.  This foundation set out to provide $500 in college savings to every baby born a Maine resident.  Tens of thousands of babies later, the foundation continues to create this substantial starting point for each baby born in Maine.  It is projected that more than 12,000 Maine babies annually will receive this grant going forward, which is automatically contributed to NextGen, Maine’s Section 529 program (a tax-favored account for saving up for college expenses[1])

That’s huge.  I’ve not seen such a program anywhere else.  But it doesn’t stop there.

Even if the target of your college savings plan was born too early to get the ‘500 for baby’ grant (it automatically applies to most children born in Maine since January 1, 2013), there are more grants available to help savers along with setting money aside for college.  The really amazing thing about these other grants is that the student you’re setting money aside for doesn’t have to live in Maine, doesn’t have to go to school in Maine – heck, doesn’t even have to ever come to Maine (although since you’re putting money aside for their education, you’d think they’d at least come up to say ‘hello’ from time to time!).  As long as the account owner is a Maine resident, these other grants are available:

Amazingly, these grants aren’t limited by household income.  Anyone who is a Maine resident can avail themselves of these grants.  As you might imagine, the child must attend school and have qualifying higher education expenses in order to actually use these grants… they’ll get clawed back if not used for legitimate higher education costs.

It’s with some trepidation that I let the cat out of the bag on all of this free money.  After all, one of the great things about Maine is its un-crowded, rural beauty, and there’s a chance with incentives like these, everyone will want to move to Maine.  More importantly, however, this can’t help but put higher education in closer reach of every child who has benefited from this program and that is a huge win for society overall.

[1] With the Tax Cuts and Jobs Act of 2017 comes even more flexibility – up to $10,000 per year per student can be used for pre-college educational expenses, such as private high school tuition.