Going back a few decades, the idea that one could (or should) closely manage their credit report was not mainstream.  For the most part, the data in your file was accessible to companies who subscribed to reporting services.  People could, for a relatively robust outlay of money, purchase their report, but few ever did.

Having said that, the actual tracking and selling of client data is nothing new.  Equifax, for example, tracks its company history back to 1898.  The proprietor of a grocery store compiled a list of customers he deemed to be creditworthy.  He offered to sell this list to other companies.  The business took off and the modern version of Equifax generates 150 million credit score updates each month!

A few things have made tracking and managing credit scores a current day fixation.

Substantially furthering the movement were an engineer named William Fair and a mathematician named Earl Isaac.  Working together at the Stanford Research Institute, they developed and pitched a scoring system to US lenders.  The company they started, Fair, Isaac and Company would eventually become shortened to FICO, and the simplified 3-digit score their method produces has become a keen focus of lenders and borrowers alike.

The importance of this score can’t be overstated.  Today, those three digits not only determine someone’s access to credit, but Auto and Homeowners insurance companies use this information in determining rates (people with lower FICO scores have, on average, higher claim rates).  Employers routinely check credit, not only to gain a look into the diligence of the job candidate, but to reduce the probability of workplace disruption that comes when creditors are calling.  Landlords routinely check the credit of potential tenants.

Once credit IS issued the FICO score often determines the rate of interest assigned to the debt.  Judging from the chart below, assuming a $200,000 mortgage, someone with a 630 credit score will pay nearly $70,000 more in interest over the course of the mortgage than someone with a 770 score.

Given the weight the FICO score has in determining so many things in our lives, we really do need to pay attention to it – and for those who don’t have it where they would like to have it, improving the score is something that can be done through smart, focused steps, over time.  It’s also something that usually doesn’t require an expensive debt repair company.  Let’s look at the following areas that impact the FICO score. 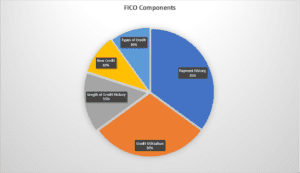 PAYMENT HISTORY:  This is the largest component (not surprisingly).  On-time payments are crucial toward indicating to potential creditors that you’ll be on time with future payments.  30 days late is bad, 60 is more than twice as bad as 30 and 90 is more than twice as bad as 60, in the impact on your score.  If you have late payments showing on your report, you can request they be investigated and hope they will fall off, but more likely the approach will be to await the 7 year period after which they are no longer reported.  Fortunately, more recent late payments have a larger impact than ones that happened years ago, so if you re-start on-time payments after a lapse, your credit score should gradually increase even before the 7 years passes.

Set up automated payments to your credit cards to avoid being late, or at least automate a reminder to make sure they’re paid.  Generally, a few days late on a credit card isn’t going to be reported to the bureaus – but still, these have the ability to result in late fees and forfeiture of favorable interest rates.

CREDIT UTILIZATION:  At 30 percent of your credit score, this is the other ‘biggie’.  This part is mostly impacted by what’s called ‘Revolving Credit’.  Unlike mortgages and car loans, Revolving credit, typified by credit cards and home equity lines of credit reflect a ‘used’ and ‘un-used’ portion.  Credit used, as a percentage of the total amount extended, is the key here.  Your score will start to deteriorate if your total utilization exceeds 30 percent of available credit.  This is assessed based upon BOTH your aggregate usage AND individual accounts.

Interestingly, if someone is exceeding the amount of credit utilization, one potential way of solving this is to add more available credit, by requesting increases to credit lines or by applying for more revolving credit.  This may have a short-term negative effect, though, as new credit and inquiries can work against the credit score.

Even if you pay off your credit card in full each month, utilization is still something to keep an eye on.   The reporting agencies actually don’t know whether you are paying your balance off each month – they just know what your billed balance is.  So if you run up a big balance on one card and pay it off each month, you may be better off by splitting your spending among a couple of cards (and obviously still paying them off each month!)

LENGTH OF CREDIT HISTORY:  The reporting agencies are tracking the average length of the accounts you have open.  This is because, statistically, newer credit has a higher risk of default.  The longer the history, the better your score.

This results in a situation where it is NOT to your advantage to close old accounts.  Closing an account will likely lower the average age of your accounts (unless the one you close is newer).  It will also impact your utilization ratio.  That said, keep in mind that it WILL increase the risk of someone misusing that account.  When making a decision about closing an older account, keep in mind that it may lower your score slightly (Length of History is only 15% of the FICO score criteria) and make an informed decision as to whether a decline of a few points in your score is worth the enhanced peace of mind of not having the additional card or credit line out there.

NEW CREDIT:  This makes up 10 percent of your credit rating.  Again, new credit tends to be more risky.  Everyone applies from time to time, and the occasional credit application shouldn’t hurt your credit much, but more than 3-5 ‘hard inquiries’ in a two year period will result in a deterioration of your FICO score.

When you’re shopping for a loan, make sure that you save actually applying for until you’ve actually done your shopping.  Each time a creditor runs a ‘hard inquiry’, it’s a reflection that you’re shopping for more credit – whether or not you actually take it on!  (Don’t worry about ‘soft inquiries’, which include you checking your own credit.  These don’t work against you.)

TYPES OF CREDIT make up the remaining 10 percent.  Generally, creditors find that consumers with diversity in the credit they manage will be better risk.  A borrower who ONLY has revolving type credit may benefit from adding installment debt like a car loan or mortgage, and vice versa.

Keeping up with your credit score is easier than ever, and is cheap.  Each of the three major credit bureaus (Experian, Equifax and Transunion) offer a free report once per year and also will provide a free copy if their report has been used in an adverse credit decision.

Just from personal experience, but coupled with a modicum of research, I can tell you that www.annualcreditreport.com seems to be the one resource out there that gets you all three bureaus (annually) and doesn’t cost money.  Surprisingly, ‘freecreditreport.com’, owned by Experian, cost me money.   Also, Credit Karma (www.creditkarma.com) has a nice app and gives you your scores for TransUnion and Equifax for free.  They have a bit of advertising (the idea being, they have your score and would be more than happy to hook you up with companies that want to lend based upon that score!)

Check your credit regularly.  We always recommend once per year, but with these free resources (lots of banks are offering free credit reporting as well), there’s no reason you’d not want to check more often.

Use Mr. Fair and Mr. Isaac’s invention to your ADVANTAGE!