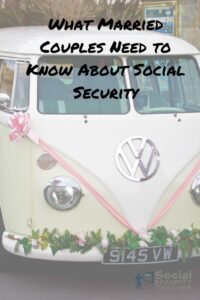 How and when to take Social Security benefits, especially for married couples, can be a confusing decision.  In a way, that’s a good thing – and not just because it helps to keep financial advisors employed!  In the 83 years since the Social Security Act was passed, changing demographics and fiscal realities have resulted in changes to the system, but the modern system of OASDI (Old Age, Survivors, and Disability Insurance) is a core part of the retirement plans of most of our clients.  The very same factors that muddy the waters are variables that can be used to improve the probability of maximizing benefits coming from the program.

Full Retirement Age (FRA) under Social Security was originally 65, but now depends upon your year of birth. For people retiring today, that age is somewhere near age 66.  We “youngsters” born since 1960 have a FRA of 67 (Stay tuned; that number could be moved back further for subsequent generations as congress deals with underfunding of the program).   Really, though, for someone who is thinking about retirement, they essentially have the ability to begin their benefits anywhere from age 62 onward.  The younger you start, the lower your benefit.  The math behind the system makes it so that, if you live to an average age, you will receive the same lifetime benefit no matter whether you start at 62 or 70 (the age after which deferral credits cease).

Knowing this, most advisors rely on an assessment of how long a client is expected to live in making this recommendation.  The longer the life expectancy, the better the numbers work if you put off taking SS benefits until 70.  The shorter the expected lifespan, the more the pendulum swings toward taking SS benefits as soon as possible.  For some, another factor I like to call “Bird in Hand” comes into play.  That refers to a growing number of clients who, given their concerns about the solvency of SS, opt to take it as early as possible, regardless their longevity expectations.  They see SS cuts as a strong probability and their hope is that future benefit reductions won’t impact active pensioners, so they want to join that class as quickly as possible.

Longevity assumptions ARE important to planning social security, but for married couples the important consideration isn’t so much the longevity of each spouse, but rather the probability that EITHER spouse outlives their average expectancy.  In the case of a married couple, even in average health, there is a surprisingly high probability that one spouse will do just that!  While the average life expectancy for a 65 year old male is 83, there’s over an 80% probability in a 65-year-old married couple that at least one spouse will live past 83.  In fact, it’s at least an even-money bet that one of the spouses will live into his or her 90s.

This joint longevity is important because of one thing:  Survivor benefits.  When one spouse dies, the surviving spouse will receive the LARGER of the two benefits.  Given this nugget, and adding the probabilities we just discussed, many times the best approach is to have the higher wage earner in a married couple delay his or her benefits to age 70, while the lower wage earner starts theirs as soon as possible, even before their FRA, provided they don’t make significant income.  In the case that the lower income spouse outlives the higher, they will still benefit from the delay because of the higher survivor benefit.  If the higher income spouse outlives the lower, that increase is maximized for the longest possible time.

A lot of couples will fall into this category.  Still there are some who might still consider both spouses delaying (when both have very high longevity expectations).  On the other hand, if both spouses think they will fall short of their life expectancy (if both have significant illness, for example), both spouses should take benefits as soon as they can.

One big exception is for spouses who have yet to file, where both were born in 1953 or earlier.  In this case, a remnant of a previous loophole, called a “restricted application” applies and while it’s similar to the strategy detailed above, the difference is that one spouse will receive spousal benefits while delaying their own benefits to age 70.  This opportunity is going to be evaporating over the next few years (because people born before the end of 1953 are going to be turning 70, making this strategy moot).

So, the bad news is that we still need to know exact dates of death well in advance in order to make fool-proof recommendations on when to start taking SS distributions.  However, taking all factors into play, especially in the case of married couples, can really swing probability in your favor, and that’s GOOD NEWS.