New tax rules make it still worthwhile to have kids. 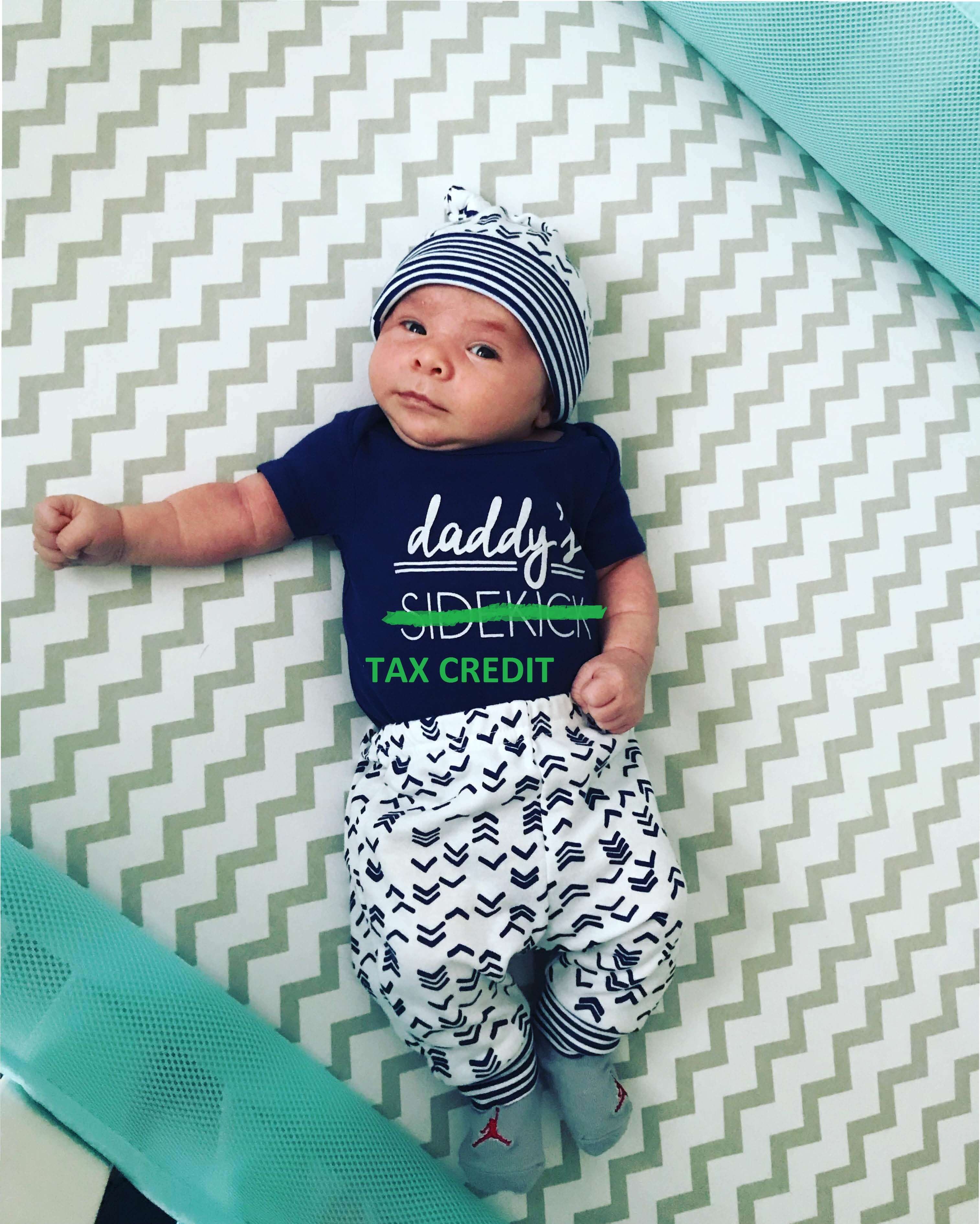 Having children is one of the great joys in life.  I speak from experience, having been a child at one point and seeing how much enjoyment I provided my parents.

As to whether or not having kids is prudent from a strictly financial standpoint, that’s subject to a wide range of factors.  Mr. and Mrs. Zuckerberg have likely realized good returns on the money they invested in raising their son, but I’d hazard a guess that not everyone has similar results.

Tax incentives have sweetened the financial case for having kids.  One longstanding benefit was that, for each dependent child, a “Personal Exemption” was allowed for most taxpayers.  For 2017 taxes, this amounted to $4,050 per eligible dependent, reducing taxable income for parents with kids.

One of the hallmarks of the 2017 Tax Cuts and Jobs Act (TCJA) was a substantial increase in the Standard Deduction (another means of reducing taxable income).  Touted emphatically upon rollout, this deduction nearly doubles going into 2018.  Single filers who used to have a $6,350 standard deduction now have $12,000.  Double those numbers for married taxpayers. 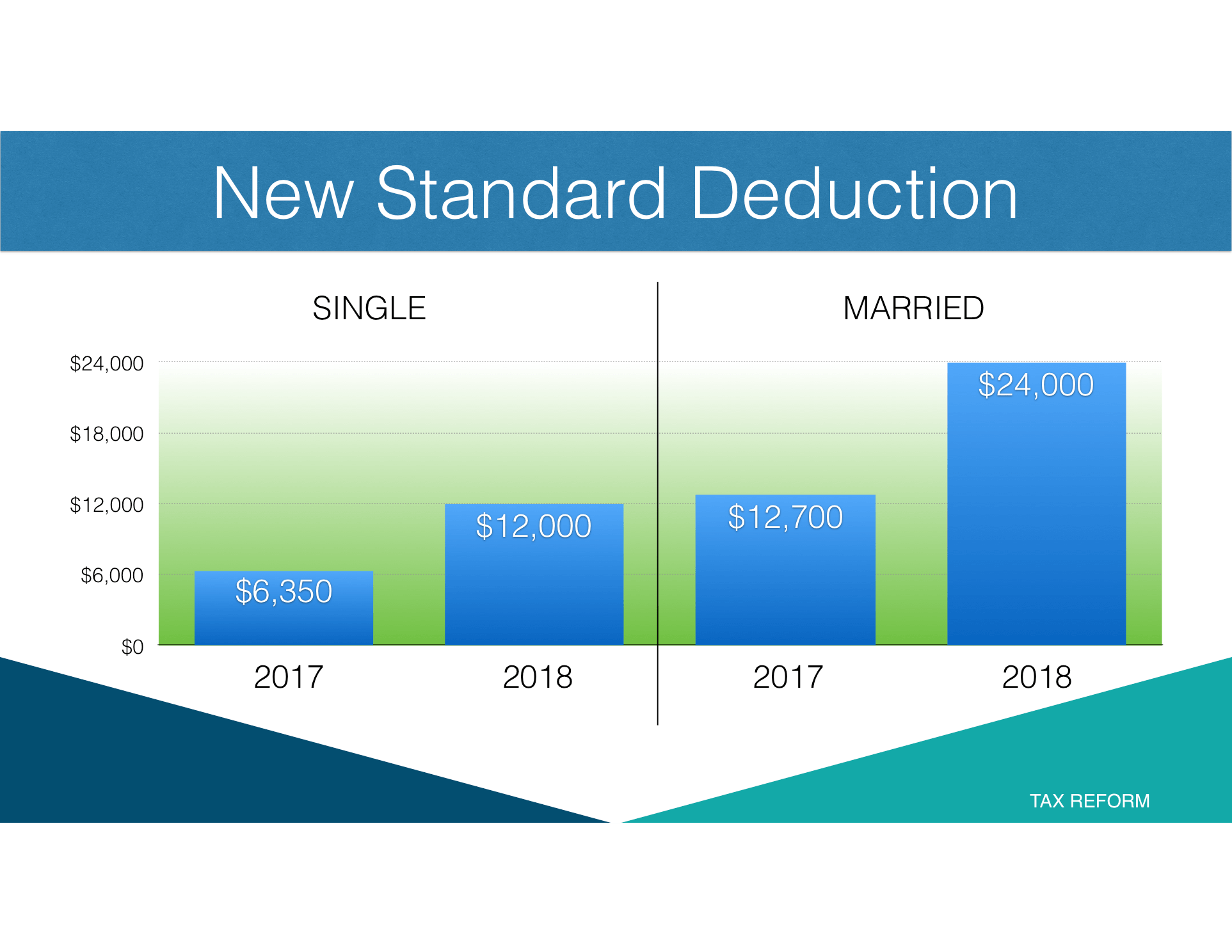 One thing that didn’t get mentioned quite as loudly, though, was that the personal exemptions completely disappeared with the new tax law.  Not only did that result in much less of a difference in what the taxable income would be for a lot of tax filers, it actually had the potential to reduce deductions (and INCREASE taxable income) for families with children.  The more kids a family had, the worse this new tax law impacted their taxable income. 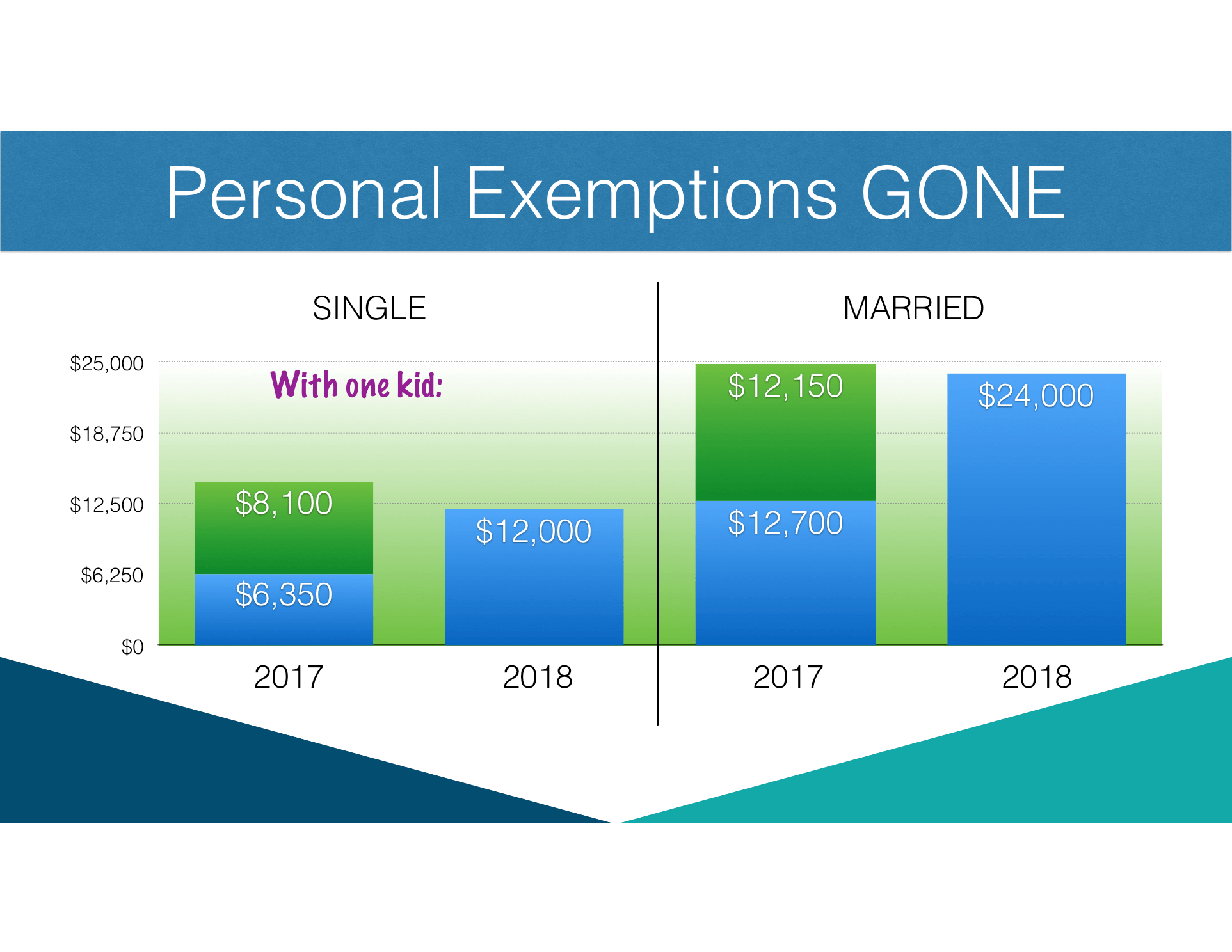 At the last minute, however, a provision was added to the TCJA to make it more palatable.  Prior to TCJA, there was a tax credit of $1,000 per child age 16 and under.  This credit was limited based upon income and was phased out after $75,000 of income for a single person or $110,000 for a married couple.  The TCJA doubled that to a $2,000 tax credit per child.  Additionally, the income one could make and still use the credit went way up: In 2018, single people making up to $200,000 and married couples making up to $400,000 can take full advantage of the credit.

This is truly an advantage to lower-to-moderate income families with children.  While the personal exemption has been lost, it was the tax bracket of the investor that determined the value of the exemption.  For a taxpayer formerly in the 25% income tax bracket, the value of a $4,050 exemption was .25 x 4,050, or $1,012.50.  That’s pretty close to the additional $1,000 of tax credit resulting from the TCJA.  And taxpayers formerly in the 15% and 10% brackets are ahead of the game.  Even taxpayers in some of the higher brackets make out well, since they were originally phased out of the old $1,000 credit – but might now be able to take a $2,000 credit!

Another benefit that arises, especially for people outside of the higher earnings levels, is that up to $1,400 of the credit is considered refundable.  That means that if the tax bill goes to zero, there can still be a refund of unused credit up to that amount.  By comparison, the now-extinct personal exemption could bring the taxable income to zero but couldn’t result in a refund beyond that.

Not everyone makes out on this, though.  For example, a single taxpayer with an income of $225,000 formerly received a personal exemption for each child.  Now, they don’t get the exemptions, and they also make too much to receive the child tax credit.  On the other hand, a married couple making $375,000 formerly were limited on their ability to take personal exemptions – but they get to take full advantage of the tax credit.

Like other parts of the new tax law, there are winners and losers scattered across income levels and situations, and you’ll want to consult your tax advisor to see where you come out.  For the majority of low-to-moderate wage earners with kids, however, the net impact of the law is a substantial reduction in taxes, sweetening the overall experience of having kids!