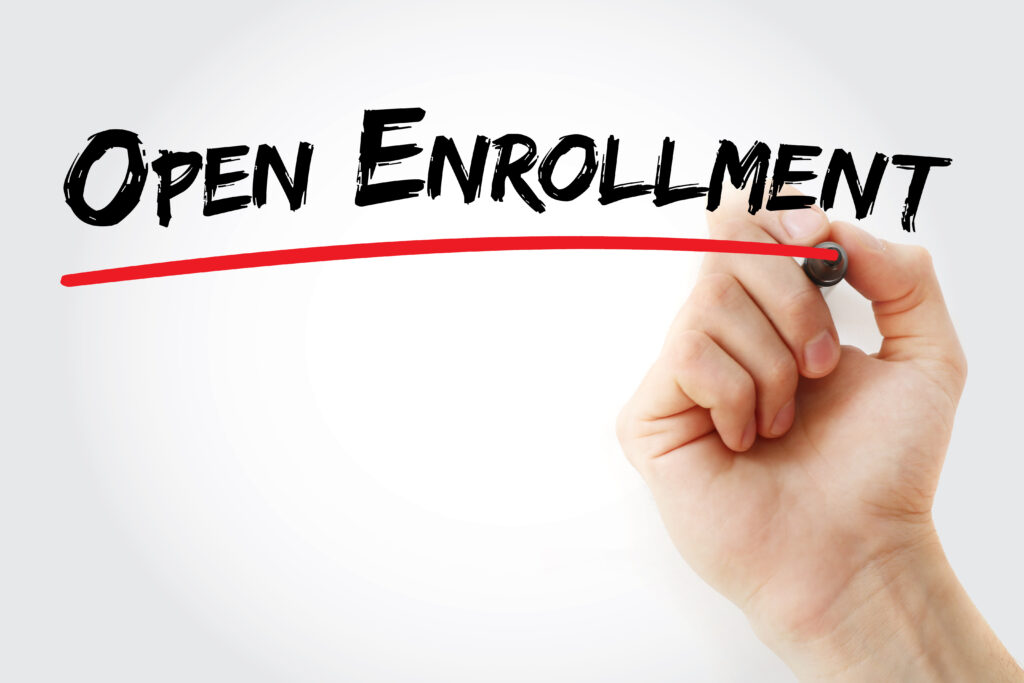 One thing I love about Maine: Seems like we have more ‘seasons’ than just about anywhere.  Sure, some will say we have the four standard seasons: Spring, winter, fall, and the Fourth of July.  To that list, you can add mud season, black fly season, blueberry season, hunting season, and (this year) an all-too-short ‘postseason’[1].  In Maine and beyond, though, the falling leaves and crisp air also heralds in another annual demarcation:  Open Enrollment Season.

Open enrollment applies mostly to insurance benefits that can be accessed or changed once per year.  The most significant of these are health insurance offerings at the employer and the government level.  Companies tend to begin these enrollments periods for employees in late October or early November, and they run for a number of weeks.

Additionally, the major government-provided insurance programs run Open Enrollment periods at this time of year as well.  Healthcare.gov, or the Affordable Care Act, or ‘Obamacare’ to many, runs an open enrollment program that runs from November 1, 2021 to January 15, 2022.  (In order to have coverage for January 1, 2022, you need to complete enrollment by December 15, 2021.)

Medicare has an Open Enrollment plan that runs from October 15 through December 7 each year.  During this period, eligible individuals can join, switch or drop a plan to start on January 1 of the new year.  In addition to open enrollment, there are two additional periods specific to Medicare:

Why have an Open Enrollment Period?

The reason certain insurance benefits can only be accessed during a finite period each year is pretty basic.  To use insurance speak, the objective is to avoid ‘Adverse Selection’.  That term refers to the fact that if everyone can enroll in insurance plans at any point during the year, they are much more likely to NOT enroll until they feel they’ll have a need for the coverage, thus creating a pool of insureds who are much more likely to be sick and therefore much more likely to make claims than to dutifully pay the premiums.  In order for insurance to work (for both insurance companies and for the government), a good blend of healthy people paying in needs to be included with a smaller group having claims paid.

Sometimes, however, the need to enroll in an insurance plan is driven by factors other than someone’s health.  Situations like job changes, loss of coverage elsewhere, marriage or divorce – these are all examples of situations where someone may be able to enroll in an insurance plan outside of their open enrollment period.  Medicare and Obamacare both have ‘Special Enrollment Periods’ to account for these exceptions.  In the case of Medicare, the most significant example is the period when one initially becomes eligible for coverage.  For most people, that is the 7-month period that includes the month of the 65th birthday, plus the three months before and the 3 months after that date.

For many, the annual Open Enrollment period comes and goes without much fanfare.  Employees and retirees tend to stick with the current plans they have in place, provided they’re being offered again in the new year.  It seems most folks aren’t big fans of change.  Some open enrollment forms simply have a box that essentially says ‘change nothing’.  Easy.

As Certified Financial Planners, we generally like to give each enrollment period some more robust oversight.  In the case of health plans:

At the very least, a cursory look at all of these factors is warranted.  Just clicking on the ‘don’t’ change anything’ button can be costly over time.

Other parts of the open enrollment process that are often overlooked but that warrant attention are:

Benefits that AREN’T a part of open enrollment

Take some time during this year’s open enrollment period to mindfully assess the options available, and make sure your selections are best meeting your individual needs.  Without postseason baseball in the way, you should have the time!

[2] One exception to this is that some ‘non-qualified deferred compensation’ arrangements only allow for an annual election – and this election is generally irrevocable, in order to conform to IRS regulations.