Judging by the media and clients I meet with, Recession is becoming front-of-mind.  If you put a group of randomly selected economists in a room and asked if we’ll have a recession next year, no two answers will be the same, and will probably range from “we won’t” to “we’re already IN one!”  Either way, the one thing I know for sure is that we’re closer to our next recession than we were yesterday.

Might be time for a refresher on recessions, since it’s been a while.  Since the great depression, we’ve had 13 recessions, leaving the average time between recessions at approximately 6 ½ years.  At well north of 10 years since the start of our last recession, this is the longest we’ve gone without a recession in modern market times.

Most economists won’t call a recession a recession until that GDP number declines for two consecutive quarters.  And the National Bureau of Economic Research (NBER), which ‘officially’ designates what a recession is or isn’t, looks at a more broad range of criteria, including job losses and overall economic impact of a reversal of GDP growth.

There are plenty of different causes for recessions, and most of the more recent ones appear to have been triggered by either high inflation or spikes in fuel prices, which caused shocks to the economic system.  The most recent ‘great recession’ of 2007 -2009 was arguably caused by the collapse of subprime debt instruments bringing down an overblown housing market. Interestingly, the great depression of 1929 was blamed, at least in part, on trade tariffs!

Most economists agree that recessions are a normal and healthy part of a growing economy, working to shake out excesses that build up in the market.  But, akin to shots and medication, they’re a part of the process no one seems to enjoy.  During a recession, economic activity slows, causing companies to see lower revenues, leading them to cut costs, often reducing workforce, leaving workers hesitant to spend money causing more economic slowdown.  Arguably, it can sometimes be the worry about a recession that brings about a recession.

Can the economy slow down like this without causing market backlash?  Possibly – but as the chart below shows, bear markets seem to like to hang out with recession. 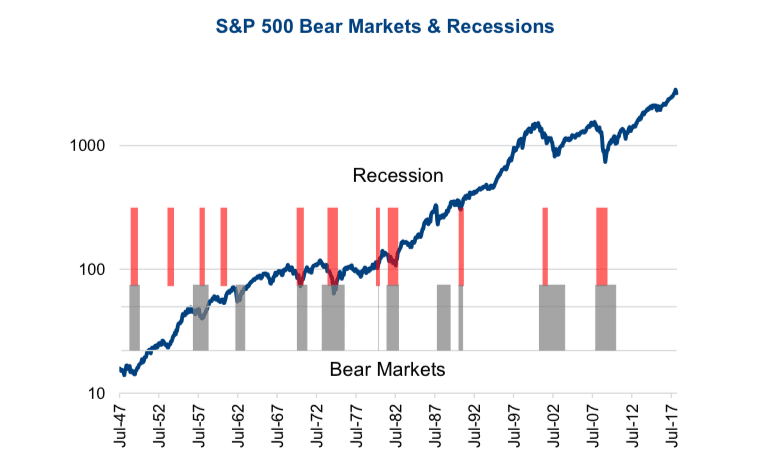 Since clients don’t tend to like bear markets, they usually want to know ahead of time when a recession is going to take place.  The problem with this is twofold:  First of all, there is often a stretch of time between indications of an upcoming recession and when the recession starts.  One example of such an indicator is an inverted yield curve, where the 3-month treasury yields a higher amount than the 10-year treasury.  Each of the last four times this has happened, a recession has followed (and as of this writing, we’re looking at another such inversion!).  Still it is 12-18 months, on average, after the inversion when we actually see negative returns on the stock market. 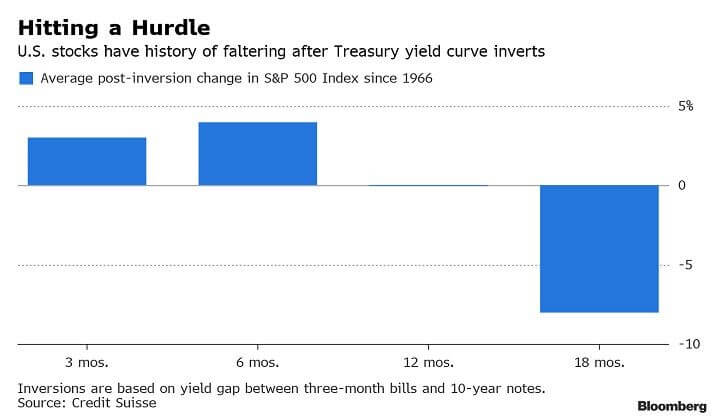 In fact, it can be reasonably said that most recessions are well on their way to being over before the data becomes available to even call the recession!

As such, as advisors and asset managers, our approach to recessions is one of preparation, not of avoidance.  Certain asset classes, like longer duration government bonds and commodities, often perform well during the early stages of a recession.  Additionally, stocks of companies in the healthcare, utilities and consumer staples industries tend to outperform other industry groups during a recession, because they tend to be consumed regardless of the economic conditions.  Industries like financial services, technology and ‘consumer discretionary’, on the other hand tend to be harder-hit.

Companies with lower levels of debt, strong cash positions and low price levels relative to their earnings are very attractive, not because their prices won’t be hurt in a recession, but because they tend to bounce out of the recession more quickly once the recovery starts.

Oh, and that’s one other statistic.  Historically 100% of recessions have been followed by a recovery.  While we always want to go into a recession with a strategy for holding down volatility, we should equally well prepare for the ultimate recovery!