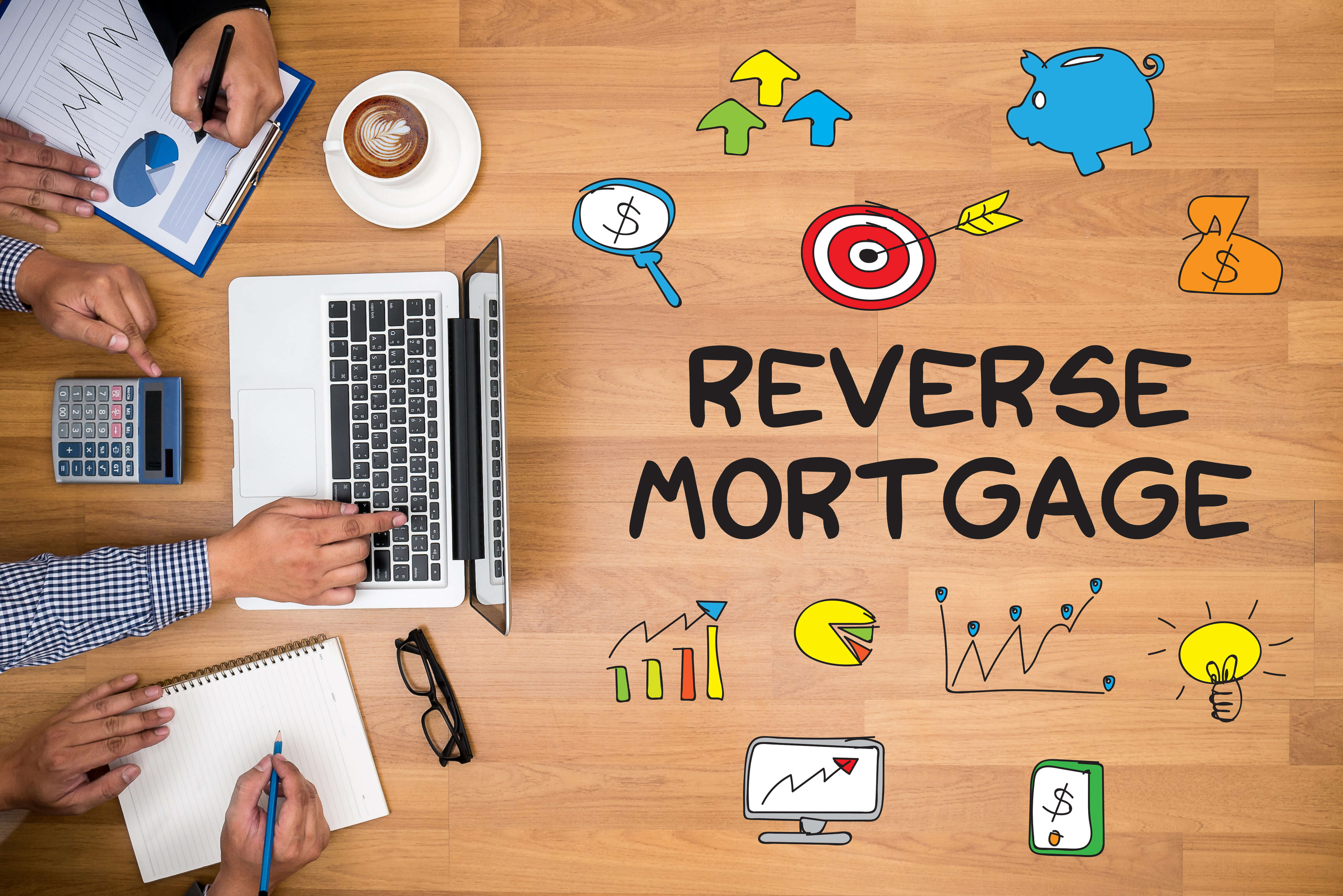 Sometimes we in the planning world tend to paint with a broad brush.  Rules of thumb become ingrained and biases develop.  In doing some self-introspection, I recently identified such behavior in myself around the topic of Reverse Mortgages.

I was quick to dismiss reverse mortgages as sub-optimal financing schemes for the desperate pensioner who’d hit the end of their assets and were out of options.  The rampantly abusive sales practices around these vehicles up to the 2007-2008 global financial crisis didn’t help.  Admittedly, their primary pitchmen, Fred Thompson and Tom Selleck didn’t quell my misgivings (I’m sure seniors will take whatever either of those men say as gospel).  And Henry Winkler?  Sorry – being sold financial products by The Fonz just seemed – well – goofy.

Bias, unconscious or conscious, can often be remedied by learning more, so that’s what I set off to do.  Spending time digging though the minutiae about reverse mortgages left me with a higher regard for these financial products, and in certain cases, I think they may indeed be useful when utilized diligently.

Reverse mortgages trace their history back to the 1960s, when a single local bank made a single loan to a customer, with no amortization (pay-down) scheduled until the borrower sold the house.  More banks began to do the same thing, although this industry remained ‘small-scale’ for around 20 years.  In the late 1980s, with more of these financing vehicles arising, the federal government created the Home Equity Conversion Mortgage (HECM loans), and authorized the FHA to insure up to 2,500 of these.  Popularity grew, and during the early 2000’s banks issued more and more yearly.  Demand peaked in the financial meltdown with 112,000 loans originating in 2008.  Unfortunately, there were many inappropriate sales of these.  Regulators tightened lending guidelines and improved consumer protections.  Because of this (along with the general improvement in the economy), the number of reverse mortgage originations declined to about half the peak level, where it’s been relatively steady since.

Further, the FHA and HUD has standardized HECM loans.  Every lender follows the same standards and issues the same loan with the same terms.  The borrower’s residence is appraised, and the HECM loan is made based upon the appraised value (up to a 2018 limit of $695,000), called the Maximum Claim Amount, or MCA.  The amount available is less than what most traditional mortgage lenders will provide.  Depending on the age of the borrower(s), the loan value generally falls between 40 and 70 percent of the MCA.

The loan may be taken a number of different ways, including:

The borrower also has the option of leaving the funds unused and drawing upon them down the road.  Unlike a traditional line of credit, the HECM is guaranteed… the bank can’t pull back the approved credit line while the borrower still lives in the house.  The only time the bank can close out the loan is on one of three ‘triggering events’:

Note that there are no creditworthiness or income requirements to receive a HECM loan, but in cases where the borrower’s credit quality or income is low, some of the loan proceeds automatically go to a fund that pays the insurance and property taxes on the home.

The primary cost to the borrower (aside from interest) is something called MIP (mortgage insurance premiums.)  There’s a 2% up-front cost… and that’s not on the amount borrowed but rather the MCA (what the house was appraised for up to the $695k limit).  On top of that, there’s an additional 0.5% annual MIP on the loan balance (basically an increase of the interest rate).  Additionally, a percentage of the loan (up to $6,000) is paid to the bank that sells the loan.  These fees are standardized under the HECM loan program and are usually built into the loan amount.  Beyond that, other fees including the appraisal and the cost of HUD counseling are paid up front by the buyer.  Some of these smaller fees can vary a little from bank to bank, but a lot of shopping around isn’t likely to make a big difference, as the major fees will be the same regardless of the originating bank.

Interest rates are usually similar to traditional mortgage rates.  Either the rate will be fixed (an option only available on lump sum payouts) or variable.  The variable options generally have limits by how much the rate can increase.

The prototypical story of a person benefiting from a reverse mortgage is one where a retiree simply wants or needs more money in retirement, and their house is their substantial asset (they’re ‘house-rich’ and ‘cash-poor’).  Setting up a HECM loan, particularly with ‘tenure payments’ creates a situation where the borrower(s) has/have a guaranteed income from the house value, without having to sell the house.  As long as they don’t have the objective of leaving the house to the kids, HECM loans can be a worthwhile use of their assets.

There are other situations where the reverse mortgages can make sense.  One is called “HECM for purchase”, where a reverse mortgage can be used instead of a traditional mortgage to purchase a home in retirement.

Example:  John and Marie own a $500,000 home.  They have a $300,000 mortgage.  Between mortgage payments and upkeep on the house, they’re cash-strapped.  They decide to downsize to a more-manageable $300,000 home.  They use the (roughly) $200,000 in net proceeds as a down payment on the new house.  To finance the remaining $100,000, they use a ‘HECM for Purchase’ reverse mortgage.  Their monthly budget improves substantially, both because of the smaller upkeep, taxes and utility bills AND because now they don’t have a mortgage payment!

Even someone not in need of additional income may consider using a reverse mortgage strategy.  Two potential scenarios are using the line as an alternative to a ‘cash bucket’ in retirement distributions and an investor wanting to leverage their portfolio in hopes of increasing overall net worth.

In the cash bucket scenario, many advisors who have clients taking distributions recommend that they keep 3-5 years’ worth of distributions in cash, to use as a distribution bucket if the market declines sharply (helping to limit the need to sell impaired assets until they recover).  One side effect of this strategy is a lower portfolio rate of return overall (because the excess cash often creates a drag on overall returns).  Since there’s not a required draw from a HECM loan, an investor can open such a loan as a line of credit.  Unlike a traditional home equity line of credit, there is no specified draw period.  As long as the investor lives in their home, the line is available.  If the market declines, the investor can stop their portfolio distributions, and take money from the HECM line of credit instead.  When the portfolio recovers, the HECM line of credit can be paid back down to zero, and kept at the ready for the next market decline.  Generally, there’s little to no cost for maintaining the line if it’s not being used (although remember that there IS a cost to starting it in the first place). 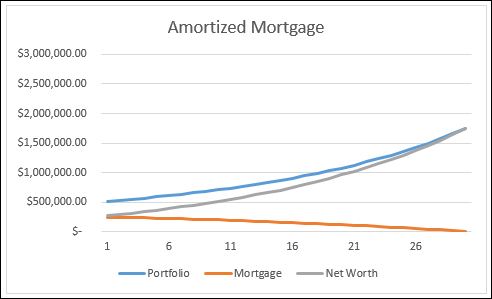 The scenario where an investor wants to leverage their assets is another potential use case for reverse mortgages.  Often, investors will maintain a mortgage on their home well into their retirement years even though they have the resources to pay it off.  The rationale is that over time they expect their investments to make more money than the mortgage is costing them, increasing their overall net worth.  Given this logic, other things equal, this investor may do well to consider replacing their conventional mortgage with a reverse mortgage.  Why?  Given the premise that the investor plans to leverage the differential between mortgage cost and portfolio return, that investor should likely NOT want to take money from their portfolio to pay off the mortgage, reducing their potential leverage. The HECM loan allows that investor to exploit this strategy more effectively than a conventional mortgage. 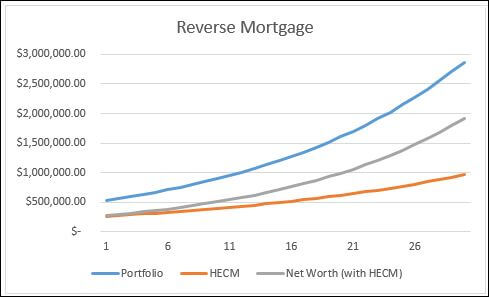 The assumptions used here are a 4% traditional mortgage cost, a 4.5% HECM loan cost, and a 6% portfolio rate of return. 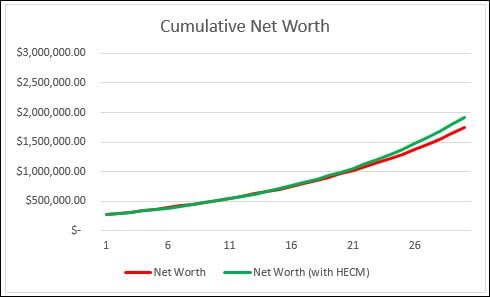 Fonzie might be on to something here.  While they’re not a solution all the time, it may pay to consider the benefits of reverse mortgages in certain situations.

Some important things to keep in mind:

And, apologies to Magnum P.I., and posthumously to Fred Thompson.