Size Matters when building a portfolio

We’re getting close to Thanksgiving as I write this and that conjures the usual nostalgic images of turkey, pies, and family.  Where family is involved, there’s almost sure to be an uncle doling out advice, and one frequent such nugget goes like this:  “Just invest in an S&P 500 index fund”.

Such advice, while doubtlessly well-intended, may come up short.  Certainly, there are things to be said for having exposure to large American companies in your portfolio, and the S&P 500 is an index that measures the performance of the largest US stocks.  But there’s a big world out there, and limiting one’s exposure to just 500 big domestic companies is bound to result in lost opportunities.

It’s not just that 500 large US companies make up only a portion of global companies.  The S&P 500 index is ‘market-weighted’, which means that the largest companies in the index make up a bigger part of its returns.  As of now, 14% of the index is made up of just 4 stocks (Facebook, Alphabet (Google), Netflix and Amazon).  25 years ago, none of these companies even existed, and when they did come about, they were small.  Netflix and Amazon were examples of how potent smaller companies can be.  A $1,000 investment in Netflix in 2004 would be worth over $500,000 today.  Purchasing $1,000 in Amazon shortly after it went public in 1997 would result in Amazon holdings of over $1 million in your current day portfolio.  You would have missed these opportunities by taking your uncle’s advice, because these stocks were too small to be included in the S&P 500 at the time.

Diversification into smaller companies (we call them ‘Small-Caps’) warrants some attention.  When we talk about ‘Large-Caps’, ‘Mid-Caps’, and ‘Small-Caps’, we are referring to the ‘capitalization’ of the companies we invest in.  Capitalization is often defined as the share price multiplied by the number of outstanding shares.  A company trading at $20 with 100 Million shares has a market cap of $2 billion.  Large-cap stocks are generally defined as having a market cap of over $10 billion.  Small-cap stocks are those with market caps of under $2 billion.  Mid-cap stocks (you guessed it) fall in between.

Given that ‘small-cap’ stocks can have capitalizations in the billions of dollars, it’s important to point out that these companies are certainly not ‘mom and pop’ operations.  They include such household names as Tootsie Roll, Abercrombie and Fitch and Del Monte Produce.

Small- and Mid-cap investing offers some diversification benefits to a portfolio of stocks.  Beyond just including more names than are available in large-caps, small and mid-cap stocks also often react differently to economic factors than their larger cohorts.  Interest rate movements, changes in the dollar versus other currencies, and things like trade wars will usually impact smaller and larger companies very differently.

Often, smaller companies tend to turn downward more quickly than their large-cap peers when the economy softens, and they tend to recover more quickly when things pick up again.  Some of this is likely because of the fact that when revenue slows to a larger company, the shareholders don’t always see this right away at an earnings level, because the company may slow down its capital expenditures at the same time.  Smaller companies, some of whom may be the very vendors that the larger companies are slowing their patronage of, will tend to feel this more directly.  Similarly, when revenue picks up, shareholders of larger companies may not feel the recovery as directly, while the company uses the increased revenue to pick up on neglected capital projects – and the more immediate beneficiary of this spending may be the smaller and mid-size vendors to the large company.

Because of this diversification, a portfolio with a mixture of small, mid, and large-size companies may have slightly less volatility than a portfolio that only invests in one of these styles.

Another positive thing about investing in smaller companies is that they tend not to be as heavily analyzed as their larger counterparts.  Big investment houses employ analysts to track every detail of the largest companies out there, but smaller companies are often either not included in analysis, or are covered by analysts who are assigned to a large number of companies, and who, as a result, may not be putting as much time into tracking each individual company.  This can result in relative ‘bargains’ for those willing to put the time into digging into a smaller company’s financials.

The really big reason, though, to diversify in smaller and mid-size companies is that, overall, they have a history of out-performing large companies.   Investors who only rely on very recent data, however, may not perceive this to be true.  Over the last 12 months, the smaller the capitalization, on average, the worse the performance has been.  The chart below illustrates this, with small-caps (illustrated in red by the Russell 2000 fund) underperforming mid-cap and large-cap funds, but outperforming ‘micro-caps’ (those with market caps under $250 Million). 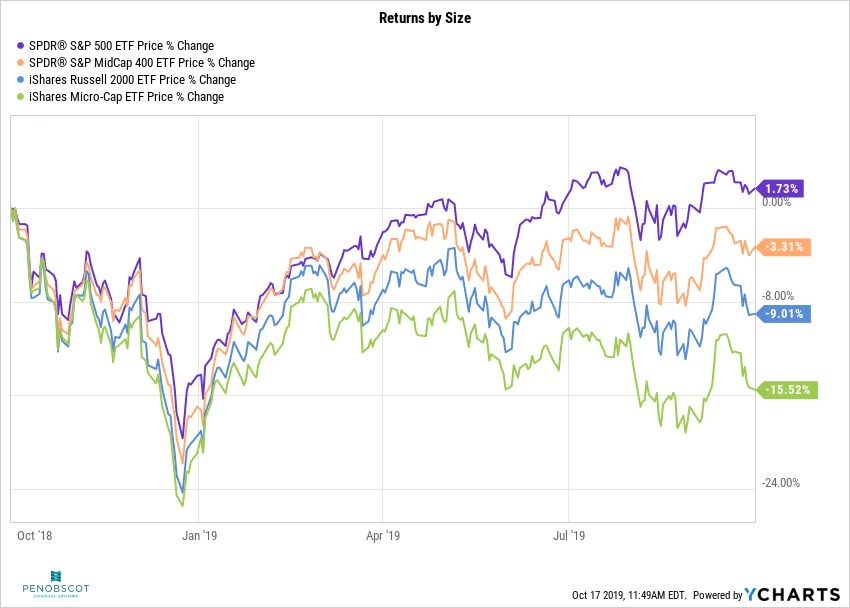 Over much longer periods, though, there seems to be two trends: 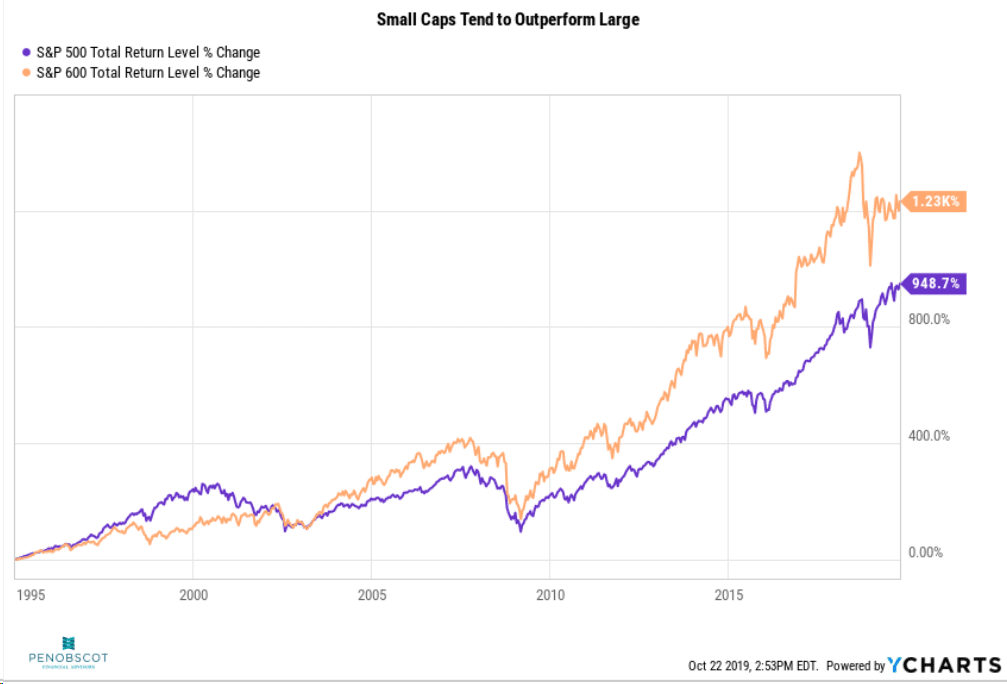 So enjoy your Thanksgiving feast, but use caution when heeding your uncle’s advice.  Sometimes it’s worth the effort to include some of the smaller companies in your portfolio.  There’s a chance they won’t stay small for long!