Slow down. You move too fast. 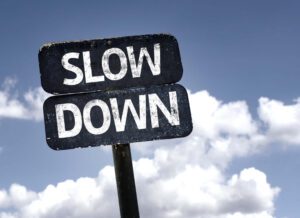 “Time is what we want most, but what we use worst”

Time is perhaps the most powerful force in money management. With enough of it, any of us can be the next Warren Buffett.  The “Oracle of Omaha” certainly has smarts to burn. But just as importantly, he’s been at his craft for a long, long, time. Most investors either start too late or don’t stick to it diligently enough to compete with Mr. Buffett’s track record.

As advisers, we routinely see the impact of this:

As such, we heartily encourage people to get started early and to move quickly when it comes to setting aside investment assets or paying down debt.

For every rule, however, there are exceptions.  There are times, however rare, when it helps not to invest too quickly, or to slow down when paying debt. To illustrate, let’s start with Philip.

Philip is a manager for Acme Widgets .  Acme has a 401(k) and Philip has been participating in the plan since he became an employee. One of the really attractive elements of the plan is that the company will match every dollar Philip contributes with 50 cents, up until the point where Philip has contributed 6% of his pay.

The IRS limits the amount of money that people can put into employer qualified plans. For 2019, that limit is $19,000, with a “catch-up provision” that allows people over 50 to contribute another $6,000.

Philip makes a $100,000 per year salary. Acme puts no monthly limits on how much someone can contribute to their retirement plan. Having bought into the notion that getting money into the plan on the tax deferred basis is a great idea, Philip decides to maximize his contributions and put 100% of his salary into the 401(k). Doing this for three months, Phillip reaches the maximum amount ($25,000)  that he can contribute to the 401(k) after three months.

There are also times when paying off debt more slowly than more quickly generates better results!

Millie works as a public school teacher. She has a staring salary of $40,000 per year. Millie accumulated $100,000 worth of federal student loan debt during her college years.  Millie diligently scrimps and saves, trying to pay off her loans as quickly as possible. Her parents also kick in, giving her a gift of $5,000 per year to help pay off her loans quickly. Given a 10 year payoff structure, her loan payments amount to $1,095 per month.

In Millie‘s case, there may actually be a benefit to her not paying off the loan nearly as quickly. Given her job as a public school teacher, and given the fact that their loans are all federal student loans that were taken out recently , Millie may very well qualify for “public service loan forgiveness”, or PSLF.

Qualifying for PSLF requires borrowers to follow some very strict rules. First of all, payments must be set up on a qualifying income driven repayment plan. The one Millie qualifies for makes her eligible to pay a monthly payment of only $196, instead of the $1095 she would have to pay under the 10 year plan. Millie would have to continue to work full-time, under a qualifying government or nonprofit employer, and would need to keep her payments current. Assuming she jumped through all the hoops, she could apply for a public service loan forgiveness after 120 qualifying payments.

The $5,000 that Millie’s parents give her each year is also not likely to be a substantial help in paying off the student loans more quickly. The reason for this is that PSLF requires 120 qualifying payments. No more than one qualifying payment can be credited each month. So adding money on top of what she’s actually required to pay under her income-based read payment plan isn’t shortening the duration of the loan. Millie will be better off investing this gift in her retirement or using it for another purpose.

Using time wisely usually involves saving early and often and paying down debt quickly. Do you look out, however, for some of these “exceptions” to that rule? Sometimes, “fast and furious” isn’t the best option.