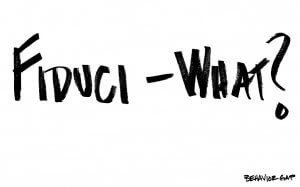 I had just finished delivering a seminar on tax code changes, and was approached by a few seminar participants who had questions.  After a few good tax questions, a couple stepped up and asked:  “Are you, or is your firm a FIDUCIARY?”

It’s an interesting question, mostly because it gets asked so often lately (and really never did get asked a few short years ago).

The concept of a Fiduciary seems to have its roots in 16th-Century England, under Henry VIII.  The modern definition from Wikipedia:

“A fiduciary is a person who holds a legal or ethical relationship of trust with one or more other parties (person or group of persons). Typically, a fiduciary prudently takes care of money or other assets for another person.”

Seems like that’s something just about any reasonable person wants or expects when they engage the services of a professional, right?  Well, as it turns out, it’s not so simple when working with people in financial services.  Whether you are working with a “Broker Dealer” or a “Registered Investment Advisor” is a material distinction, as historically, Investment Advisors have been held to a fiduciary standard of care, whereas Brokers have been held to a different standard (called “Suitability).  There’s a big gap between the two standards.  A broker does not have to act solely in the best interest of the client, and given the fact that individual brokers are legally “Registered Representatives” of broker-dealers, they legally have an obligation to act in the best interests of their broker-dealer.

So, now we get to the reason that more people are asking about fiduciary status.  10 years ago, in the heat of the global financial crisis, a piece of legislation that came to be known as “Dodd-Frank” sought to protect investors from some of the abuses in the industry that led to the meltdown.  Part of the solution, as they saw it, was to task the Securities Exchange Commission (SEC) with creating rules that would protect investors.  Years went by, and the SEC hadn’t really done much in this area, so the Department of Labor put together regulations to protect investors.  If you’re wondering what the DOL has to do with investors protection, you’re not alone.  But it turns out, the DOL is VERY interested in regulating employee retirement plans.  In 2017, the DOL (after a short delay, directed by the Trump administration) enacted rules that required a fiduciary duty of brokers who work with retirement plans (including Individual Retirement Accounts).  Notably, plain old individual accounts that aren’t employer plans or IRAs don’t come up under these investor protections.  A broker with a fiduciary duty on one account may still be under the less stringent suitability standard on another.

The “DOL Fiduciary Rule” has come under continuous assault from the Broker-Dealer industry, who makes the valid point that they are selling products, not rendering ongoing advice and that, as a result, they should not be held to the fiduciary standard.  In the past month, they have succeeded in defeating this fiduciary rule in the fifth circuit court of appeals.  Significant groups (including, as of yesterday, the AARP) have swooped in to protect the rule, but it seems to be on shaky ground.  Meanwhile, on April 18, the SEC finally stepped up and provided its own version of the DOL fiduciary rule.  While they actually title the standard of care a “best interest” standard, it seems to be closer to “fiduciary” standard than to the old “suitability” standard.  In fact, yesterday, SEC chair Jay Clayton said “We’ve called it the best-interest standard, but I want to be clear — for broker-dealers, there are core fiduciary principles embodied in that best-interest standard”.  In addition to this standard, the SEC rule proposes a simplified plain-language document that would be provided to each investor laying out the duties of the investment professional, conflicts of interest, and costs.  It also proposing limiting the use of the title “Advisor” to those who actually provide ongoing advice under a fiduciary standard.

So:  will the SEC rule become the new standard?  Or will the DOL fiduciary rule be revived under the fifth circuit or maybe even the Supreme Court?  This may take moths or years to be worked out, and it appears for the time being that brokers are back under the ‘suitability’ rule, not the fiduciary rule.  Investment Advisors are still held to the fiduciary standard.  If you’re not confused yet, chew on this:  Most industry professionals are BOTH broker dealer Registered Representatives AND Investment Advisor representatives.  So the same person may very well be a fiduciary some of the time and a non-fiduciary at other times.

It’s no wonder this is something people have questions about.  It’s also no wonder many firms (PFA included) are abandoning broker-dealer affiliations so that there need not be any question of their status as fiduciaries.

As I write this, I’m at the Fi360 Annual Conference, the largest gathering of investment fiduciaries in the world.  While that may not sound like terribly exciting group, the status of the fiduciary standard as a political football is making things very interesting, indeed.  As this process makes headlines, I fully expect to hear the question about the “f” word more and more.  And the answer, at least for PFA, is:  YES.