Will Social Security Survive This? 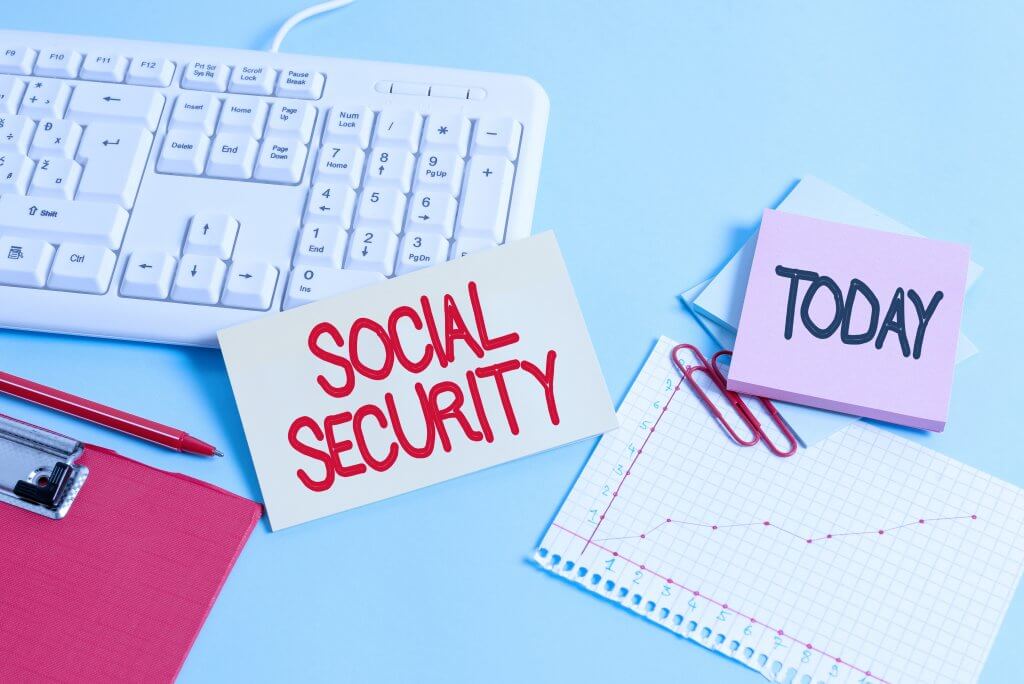 In the quarter century since, there has been very little done to resolve the shortfall.  In the early 2000’s there was a lot of time and press devoted to the idea of ‘privatizing’ Social Security, essentially turning it into more of a ‘defined contribution’ plan than the current ‘defined benefit’ structure.  Nothing came of that (and many look at the state of markets in the interim and are thankful).  Small fixes have been made, but steps like the 2019 repeal of the Obamacare tax on ‘Cadillac Plans’ are expected to further exacerbate the shortfall.  Nothing has been implemented that comes close to the measures that would be needed to remedy the shortfall.  As of last year, the projection was that in 2035, only about 80 percent of benefits could be paid out.

In other words, warnings that were issued 40 years ahead of time have not been heeded. And now we’re looking at funding shortfalls that are only 15 years away.  Many would argue that repairing the system today would be politically even harder than it was back then.  Partisan discord has risen to unprecedented levels.

All of this was true prior to the coronavirus pandemic.  Some are asking whether the significant amount of government spending is going to bankrupt Social Security sooner than originally thought.  The good news is that the stimulus money is NOT coming from the Social Security Trust Fund.  That money is (for now) safely sequestered from the current record levels of spending.  But there are still impacts of COVID-19 that are making the shortfall worse.

How the pandemic is further hurting Social Security

One part of the relief being offered to employers struggling through the pandemic is that they can defer paying this payroll tax in full until December of 2022.  While this is a delay and not a reduction in what they have to pay, there is a significant probability that some of the struggling employers who do defer may go out of business between now and when the money is paid back, reducing inflows to the trust fund.

Obviously, despite programs that help employers to keep employees on payroll, the number of people unemployed is staggeringly high.  Over 25 million American workers have lost their jobs during the pandemic.  This is a huge amount of that payroll tax that is not being paid in, currently.

Additionally, while income to the Social Security trust fund has slowed, distributions from the fund are increasing.  People who are out of work, but eligible for Social Security retirement benefits are (often out of necessity) beginning to take their benefits, far earlier than would have been the case if they were able to continue working.  Other Social Security programs, like disability payments for disabled workers, are being tapped at a higher rate as well.

A more urgent need for action

We all hope that the impact of the COVID-19 pandemic is temporary and that we can get back to normal.  But even if that return is quick, we’re still left in a situation where we have an urgent need to fix a system on its way to insolvency.  And some worst-case scenarios move that insolvency date to the early 2030s or even late 2020s!

How to fix the problem

Simply speaking, there are two ways to fix the situation: 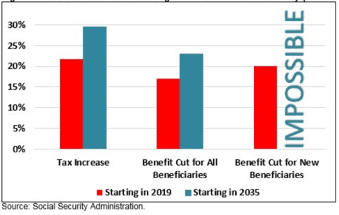 According to a nonpartisan Committee for a Responsible Federal Budget, raising taxes by 3.1 percentage points now (from 12.4% to 15.5%) would resolve the shortfall through the year 2094.  Similarly, a 19% cut in benefits would do the trick.  But these are the amounts if we took care of business right now, in 2020.  If we wait until 2035, we’d need a 4.1 percentage point increase in payroll taxes, or a 25% cut across-the board in benefits.  AND, by 2035, we will no longer have the luxury of simply cutting benefits for FUTURE beneficiaries… reductions to all beneficiaries would be necessary.

It’s likely some combination of increased payroll tax revenue and decreased benefits.  Flat increases to the payroll tax rate, increases to the Social Security wage base, or applying a surplus tax to income over a certain amount – $400,000 has been tossed around – are all ways that have been floated to increase revenue.  Delaying ‘Full Retirement Age’ to newly eligible recipients (to maybe age 68 or 69) and thus increasing the reduction for early distributions is another way.  Changing the current calculation for annual benefits increases (something called ‘Chained CPI’) is another way of effectively reducing future benefits, relative to the current program.

Perhaps a silver lining is that the current crisis is likely to change a lot of things in Washington.  The importance of solid social programs has never been clearer.  The ability for the government, when acting quickly, to absorb amazing shocks is on display for all to see.  With luck, this will facilitate bipartisan support for stabilizing this cornerstone of financial security for generations to come.