Buying a home in a crazy market 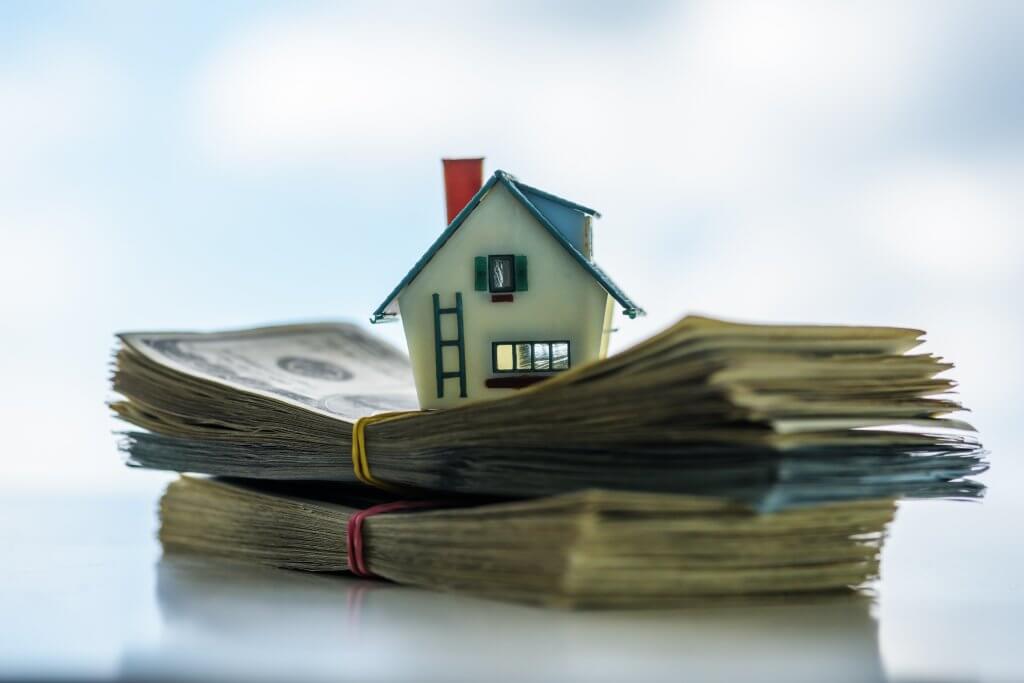 Easily one of the most “I didn’t see THAT coming” fallouts from the pandemic has been the boost to the housing market, nationwide.  While some areas have seen more frenzied action than others, the general trend has been toward one of the most significant ‘sellers markets’ in history.  This has persisted into 2021, and as I write, there are still more potential buyers than there are houses for sale.

While this has had a part in increasing overall household wealth, it has created challenges for people who need or want to purchase a new home.  We’ve all heard stories of houses going on the market and immediately receiving multiple offers, often well above the ‘asking price’.  People trying to purchase a home often find themselves frustrated and not getting the home they had their eye on.

This type of ‘panic buying’ certainly warrants some caution on the part of would-be buyers.  There are some for whom buying is a strong NEED and others for whom buying is a WANT.  First-time home purchasers, newlyweds, people relocating; These make up the crowd of people who are buying because they need to buy.  Strategically entering the market as buyers requires some care and preparation, which I’ll discuss below.

On the other hand, people considering ‘right-sizing’ a home, buying a second house, or purchasing for investment purposes can be categorized as people with less of a need to buy at this time. Those in this category might find it prudent to go cautiously into the current market, or even to bide their time and await an end to the feeding frenzy

Interestingly, people who are buying out of a need for a home aren’t necessarily more frenzied than those purchasing a second home.  Some of the more significant competitive activity seems to be happening around real estate in prominent vacation spots, where buyers are scrambling to pick up second homes.

Is this a bubble?

All of this leads to questions around whether we’re in a price ‘bubble’ that will soon burst, sending housing prices into a downward spiral.  Those who were paying attention in the early 2000’s saw such a dynamic play out in 2007 and 2008 with the global financial crisis.  In many areas, prices took 10 years to recover their pre-crisis levels.  It’s likely some otherwise enthusiastic buyers may be sitting out the current run-up in prices with just this thought in mind.   Trillions of dollars in economic stimulus money are still sitting in bank accounts but that isn’t expected to last forever.  The current interest rate environment is not expected to go on in perpetuity, either.  It is widely expected that interest rates will begin to go up in the foreseeable future, and maybe faster than originally expected if inflation surprises to the upside.

There are, however, some signs that the new higher level of home prices may be sustainable in the longer-term.  Housing prices, while they certainly have seen a strong level of appreciation since mid 2020, are not far outside a longer term trend line that goes back many decades. (figure 1).  Additionally, when overall costs of mortgage payments on an average home are measured relative to average household incomes, the resulting ‘Affordability Index’ shows that the recent run-up in prices has not made homeownership less affordable for the average American buyer (figure 2).  This is due in large part to the historically low mortgage rates that have emerged over the past year.

Figure 1: The housing price trend has been steadily positive despite some pullbacks.

Figure 2: The National Association of Realtors Housing Affordability Index has remained in the same general range since before the financial crisis of 2008. 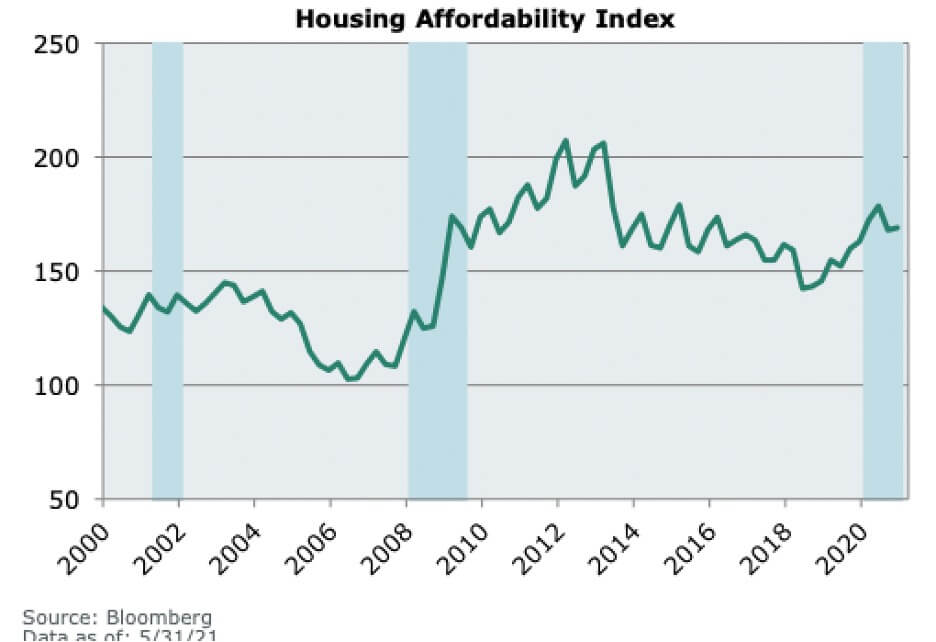 Being a Strategic Buyer

Once you have decided that you’re jumping into this seller’s market as a buyer, there are a few things to consider, in order to carry as much advantage into the negotiations as possible.

Cash Is King.  You’ll hear this phrase a lot.  Sellers are happy with ‘cash offers’ because this removes one uncertainty from the process to closing.  Sellers are almost always going to choose an offer of cash ahead of a similar offer that is subject to a financing contingency.  But it’s important to remember that making such an offer does not require you to actually pay cash for the house!

Example:  Bob and Marge find a home they want to buy.  Their credit is fine, and they have ample assets in a brokerage account to purchase the house in cash.  They would rather finance, to take advantage of low rates and to avoid capital gains taxes they’d be subject to if they sold their investments in the brokerage account.  They make a ‘cash offer’ (simply an offer that is not contingent on them obtaining financing), and set a closing date well enough in advance that they can complete the financing process in time.  If anything goes wrong in the financing process, they’ll (begrudgingly) sell off their brokerage assets to close on the house.

Mortgage Preapproval is vital if you are putting in an offer that will be subject to a financing contingency.  The seller will almost always want some indication from a financial institution that, given your financial situation, you will qualify under their underwriting standards.  This is NOT the same as a ‘clearance to close.’  That comes later in the process, only after a painful amount of income and asset documentation is reviewed and approved by the lender.

‘Seasoned’ bank assets and ‘verifiable’ income:  These requirements often take borrowers by surprise.  Generally, lenders like to see assets that have been around for a while.  They’ll usually look back at least 60 days to make sure you aren’t taking a short-term loan of money from someone just to qualify.  If you are receiving a gift from someone, try to plan on having that a few months ahead of using it to buy a house.  Income is pretty straight-forward for people who are employed, but business owners and especially retired individuals often find it challenging to prove the income levels the banks are looking for.  Generally, your financial advisor should be able to provide documentation stating that the level of assets available will support income at a level that will cover budgeted mortgage payments.  In numerous situations, I’ve seen banks require that an automatic distribution be coming from retirement funds (even when there’s plenty of cash on hand to make the payments).

Shop below your budget, particularly in this market.  It is frequently the case that you may need to bid over the asking price for a property, so you don’t want to be in a situation where you’ve already made your best offer.

Avoid ‘panic buying’.  Go into any negotiation with a walk-away number, and stick to it!  Be prepared to walk away from a negotiation.  Don’t go into it with the notion that you must have this particular house.  It’s a sure recipe for regret down the road.

Contingencies are a part of nearly every real estate negotiation.  Much in the same way as ‘cash is king’, though, it’s often the offers that are subject to the fewest contingencies that carry the day in the competitive buyer scenario.  If you can fix a defective roof, septic system, etc – or bring some electrical outlets up to code, you might not want to make these inspection items contingencies to closing the deal.  Don’t go in with a ‘no-contingency’ approach, however, if you’re stretching to simply afford a house.  Better to lose the house than to end up with repairs and updates you can’t afford after buying.

Escalation clauses are seen more and more these days.  They simplify the competitive bidding scenario by automatically increasing the buyer’s offer to a certain amount above any competing offers, automatically.

Example:  Doug and Kyle are interested in buying a lake house and they’re aware of the fact that they’ll be in a competitive bidding situation for the house.  It’s offered at $495,000 and they’ve offered the asking price.  They also have committed to an escalation clause which increases their offer to $2,000 above any other offer the seller has received.  They limit their escalation to $525,000.  If another potential buyer offered $510,000, Doug and Kyle’s offer immediately becomes $512,000, without them needing to supply another formal offer.

It’s not all about price.  We purchased our home back in 2017 and were in competition for other offers.  The seller simply ignored other offers because she wanted to sell the house to us and we had provided her an offer that met with her expectations.  Another home near us recently sold for significantly less than the highest bid.  In that case, the sellers had met and befriended the buyers as part of the process and would rather the house went to these buyers than the highest offer.  These are not uncommon events.  People selling a house are often selling something they’ve held close identity with for a significant period of time.  Often, they’ve put countless hours into maintaining the home and land.  Taking the time to communicate to the buyer what you find special about their home and how you intend to be a good steward of the property into the future can often make a big difference in a competitive-bid environment.  The sellers have friends in the neighborhood and they don’t want to jeopardize those friendships by selling to someone who doesn’t respect those relationships.  Take time to write a letter about yourself, and include it with your offer.

It isn’t easy to ‘game’ the real estate market.  Trying to time a purchase is a very imperfect science.  If you need to purchase a home, you likely don’t have the luxury of waiting a long time to see if prices come back down.  And they may not.  Take the time to give yourself all of the advantages you can.  And GOOD LUCK!

Check out our podcast about the current Maine Real Estate market, mortgage rates and more!