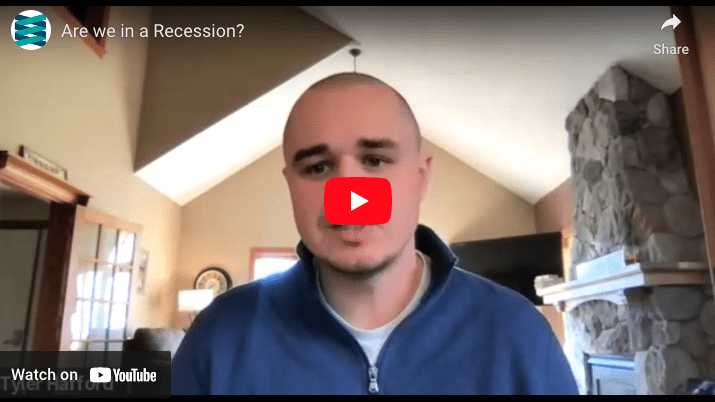 Recessions are a normal part of the business cycle. Economies grow and contract with peaks and troughs of activity. Since 1857, the U.S. economy has experienced 34 business cycles of growth and recession, with recessions occurring on average about once every 5 years. Since WWII, that average has shrunk to once in every 6.25 years (thanks largely to FDIC insurance putting a stop to runs on banks, and the Federal Reserve’s role in enacting monetary policy).

So what constitutes a recession?

The old rule of thumb is that two consecutive quarters of negative growth for gross domestic product (GDP) can be regarded as a recession (now termed a technical recession), but since 1979 the U.S. has relied on the Business Cycle Dating Committee of the National Bureau of Economic Research (NBER) to announce official recession status. This committee looks at a range of economic factors in addition to GDP, and defines a recession as “a significant decline in economic activity that is spread across the economy and that lasts more than a few months.” Some of the underlying economic factors they use to determine a recession include employment, personal incomes, consumer spending, business sales, and industrial production. Most, but not all of the NBER designated recessions have coincided with a technical recession.

While the Business Cycle Dating Committee is thorough, they are not always timely. Since they rely on mostly lagging indicators, or data points based on past behavior and output, they are only able to look in the rearview mirror. Historically, it has taken the committee anywhere between 4 and 21 months to declare that a recession has started. This is not especially helpful for the everyday investor, and it means that we’re often in (and perhaps already through!) a recession before it is officially determined. It’s no surprise then that the old rule of thumb is still frequently used – at least the GDP reading provides us with a real-time economic temperature gauge every quarter. Right now, that temperature gauge is putting us in a technical recession for the first and second quarters of 2022.

What are the committee’s economic indicators telling us?

Here are the year-to-date trends based on the most recent data available:

None of these indicators are screaming recession, but that also doesn’t mean we aren’t nearing a peak before the downturn.

Let’s address the elephant in the room: inflation.

Inflation started picking up in Q1 of 2021 and has been running at 8% or higher for a consecutive 7 months since March based on the Consumer Price Index. This is 6% higher than the Fed’s 2% target. The NBER does not directly consider inflation as its own indicator, but rather uses inflation-adjusted readings to determine the economy’s health despite current inflation. To get a better understanding of how inflation impacts recession, we need to look to history.

Inflation was much more volatile before the Federal Reserve began enacting modern day monetary policy in 1951, using rate increases and money supply tactics to tamper down or boost inflation as needed. Since then, we have seen only one, extended period of high inflation in which to make economical comparisons. During the 1970s and early 1980s, inflation reared its head and remained a consistent problem resulting in a series of recessions. While the current-day circumstances, underlying causes, and resulting actions of the Fed may differ from today, it is helpful to observe the trends from that period to gain some perspective for where we stand today.

From the beginning of 1970 to the end of 1982, the US experienced four recessions that coincided with high inflation. During this span of 13 years, the Consumer Price Index rose at a rate of 8% or higher for a collective 5 years, and saw rates between 6% and 8% for an additional 4 years. There were two waves during this period in which inflation reached the double digits:

The four recessions that occurred during those 13 years varied in their durations, lasting from 6 months to 16 months. Some were deeper than others, involving longer recovery times. Drops in employment ranged from -1.0% to -3.1%. Personal incomes fell as much as -5.0% but grew +0.5% in another instance. Business sales declined between -4.0% and -13.0%, and industrial production slowed by -6.0% to -13.0%. Given the large ranges in outcomes, it’s helpful to look at averages when making comparisons and setting expectations. The average length of these four recessions was 12 months, with a 1.7% drop in employment and a 1.6% decline in personal income. Sales fell an average of 7.1% and industrial production fell an average of 8.6%. The average recovery times for these different metrics ranged from 5 to 13 months.

What about the stock market?

As an investor, you’re probably wondering what the stock market was doing during this time. While the stock market is not the economy, it is closely intertwined. The S&P 500 saw declines with each of the four recessions, ranging from -15% to -48% from their recent market highs. It took the market as little as 3 months to recover when declines were more limited, and as long as six years for the more extensive -48% market loss. On average, the market fell -30.5% and took about two years to recover.

Some may be curious about the timing of these market declines. The stock market is regarded as a leading indicator of the economy, meaning it should be flashing warning signs before the economy begins to slow, as was the case with each of these recessions. On average, the S&P 500 started to decline 8.5 months before the start of a recession and bottomed out 7.5 months into the recession. With the average length of the recession lasting 12 months, this means that while the first half saw market declines, a good part of the second half began to see a market recovery. The average recovery time for the S&P 500 during this period was 24.5 months, meaning markets weren’t fully recovered until 20 months after the end of the recession.

Let’s wrap it up…

So where does all of this put us today? What should we be anticipating given the current economic indicators and market signals when comparing these high inflationary times to the past? While we are currently in a technical recession based solely on GDP, other economic indicators are not yet faltering significantly. However, the market has been signaling trouble ahead for the last 10 months, with the S&P 500 seeing declines of -25%. History has taught us that as inflation persists, it’s prudent to anticipate a recession ahead.

For the sake of building out a timeline based on historical averages, let’s assume we enter a recession in January. If the average length of recession under high inflation is 12 months, then 2023 could prove to be a difficult year for the economy. History also tells us that we should expect to see new market lows after entering a recession, with the average total decline being -30.5% for the S&P 500. This would mean an additional -5.5% tumble from recent lows occurring in the first half of 2023 and recovery beginning in the second half. Our expectations for a full market recovery should not be more promising than the two-year average after reaching market lows, putting full market recovery in mid-2025.

No one knows what is in store ahead. The next recession could look very different from the picture these averages paint. Regardless, history is telling us that it’s a good time to take stock of our personal financial positions to ensure we’re ready for a slowing economy. Whether that means bolstering savings, reassessing job security, or finding ways to take advantage of a bear market, everyone should ready their recession playbook.

DISCLAIMER: The foregoing content reflects the opinions of Penobscot Financial Advisors and is subject to change at any time without notice. Content provided herein is for informational purposes only and should not be used or construed as investment advice or a recommendation regarding the purchase or sale of any security.

You can subscribe to have episodes delivered straight to your device by clicking the links below: