By James BradleyApril 8, 2020May 6th, 2021Market Commentary, News
No Comments 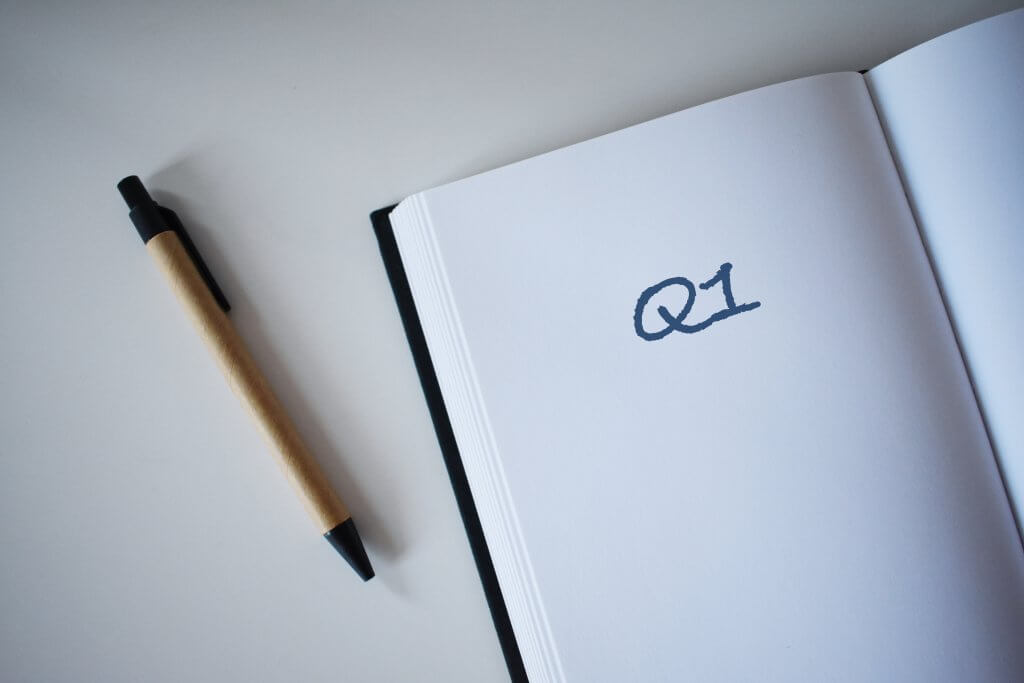 The world’s economies and stock markets have been rocked by the spread of COVID-19. Investors’ fears prompted a major sell-off in February and March, plunging stocks well below their 2019 closing marks. Nevertheless, 2020 started off in a positive way. Following a strong 2019, stocks were slow to move forward as investors cashed in some of their 2019 gains. But by mid-January, each of the benchmark indexes were safely ahead of their 2019 closing marks. However, concerns over the COVID-19 outbreak in China quelled investor optimism. By the end of January, only the small caps of the Nasdaq remained ahead of their prior year’s pace, as each of the remaining indexes listed here fell into the red.

February started off as January ended, with investors more inclined to sell rather than buy equities. However, word of China’s plans to cut tariffs on some U.S. imports sent stocks higher during the second week of the month. The Nasdaq was more than 6% over its 2019 year-end value while both the S&P 500 and the Dow also pushed ahead. But by the third week of February, the impact of the virus was becoming evident with news of a widespread outbreak in South Korea. Selling accelerated the following week as outbreaks were reported in Iran and Italy. As more cases were reported in the United States, investors feared that containment of the virus was not likely and rushed to cash in stocks. By the end of February, each of the indexes lost significant value led by the Dow, which fell more than 10% for the month.

March 2020 will surely go down as one of the most turbulent months. COVID-19 continued to spread worldwide. In the United States, confirmed cases and, unfortunately, deaths spiraled. Fear became the motivating factor in our daily lives — fear of catching the virus, fear of the illness affecting our loved ones, fear of losing our jobs, fear of economic failure, and fear of losing our money. With respect to the stock market, this fear manifested itself in a major sell-off for most of the month. After falling sharply during the last week of February, stocks rebounded marginally to open the month. But that push was short-lived as stocks plummeted dramatically mid-March, despite the announcement of new actions and legislation by the Federal Reserve, Congress, and the President. On March 20, each of the benchmark indexes listed here posted double-digit losses. Year to date, the major indexes were more than 20% behind their 2019 closing values. The passage of the CARES Act at the end of the month helped ease investors’ concerns enough to move back to stocks. The end of the month saw each of the benchmark indexes post major gains, with the Dow marking its best single day since 1938. However, the spike in index values was not nearly enough to offset the major losses sustained throughout the month. March saw the Dow fall almost 14%, the S&P 500 drop over 12%, the Nasdaq lose 10%, the Global Dow give back close to 15%, and the small caps of the Russell 2000 plunge nearly 22%.

The first quarter of 2020 closed with each of the benchmark indexes securely in the red compared to their 2019 year-end values. The Russell 2000 again suffered the largest three-month fall, closing the quarter down nearly 31%. The Dow suffered its worst quarter since 1987, while the broader-based S&P 500 hasn’t seen a quarterly decline this bad since 2008. The Nasdaq fell more than 14%, marking its worst quarter since 2018. The Global Dow fell over 24% for the quarter.

Employment: Clearly the impact of shutting down much of the country is only starting to show in the March numbers.  U.S. employers cut 701,000 jobs during the month of March, a number that is sure to spike higher in April, and will probably be revised itself.  There is hope that the CARES Act may be able to partially blunt what is hopefully a temporary and sharp disruption.

In the months leading up to the current health crisis, employment numbers were looking robust.  After adding 225,000 new jobs in January, employment rose by 273,000 in February.  There was a 3.5% unemployment rate overall, and average hourly earnings increased by 3.0% over the 12 months ended in February.

FOMC/interest rates: The Federal Open Market Committee held several emergency meetings in March, dropping the target range for the federal funds rate 150 basis points to 0.00%-0.25%. To further combat the economic impact of COVID-19, the Committee proffered a number of new and drastic measures. Among the actions taken by the Fed are unlimited bond buying including the purchase of corporate bonds; $300 billion in new financing; and the establishment of two new facilities, the Term Asset-Backed Securities Loan Facility to enable the issuance of asset-backed securities, and a Main Street Business Lending Program to support lending to eligible small and medium-sized businesses.

GDP/budget: According to the third and final estimate for the fourth-quarter gross domestic product, the economy accelerated at an annualized rate of 2.1%, the same rate as in the previous quarter.  While the impact of the widespread stoppage of the economy will not be fully known until months down the road, it is very likely that March will be the entry point to a fairly sharp recession.  Projections from the Congressional Budget office point to the GDP declining by 7% in the second quarter.  Three successive phases of economic stimulus, with more likely coming, will clearly push the budget deficit to a very high level.

Inflation/consumer spending:  January and February CPI numbers inched ahead at 0.1% both months.  Large drops in fuel prices during the month of March may result in these numbers slowing.

International markets:  The spread of COVID-19 sent world markets and economies tumbling. With over 110 countries and territories reporting cases of the virus, major institutions and banks have cut their forecasts for the global economy. Several nations, led by China, have ordered certain areas locked down, restricting movements of millions of people and suspending business operations. China’s gross domestic product is expected to plunge to 4.9% this year, slower than earlier forecasts of 5.7% annual growth. Year to date, the STOXX Europe 600 Index fell almost 23%, Germany’s DAX slipped over 24%, France’s CAC 40 lost 24%, Italy’s FTSE MIB Index dropped 26%, the UK’s FSTE 100 Index has given back close to 23%, and Japan’s NIKKEI 225 is down 21%.

Consumer confidence: Not surprisingly, the Conference Board Consumer Confidence Index® declined sharply in March. The index fell to 120.0 from February’s 132.6. The Present Situation Index — based on consumers’ assessment of current business and labor market conditions — decreased from 169.3 to 167.7. However, the Expectations Index, which is based on consumers’ short-term outlook for income, business, and labor market conditions, fell from 108.1 to 88.2.

Almost certainly, 2020 will mark the end of a record economic expansion in the US.  A sharp second quarter earnings recession is all but certain.  Depending upon the trajectory of the virus and efforts to stop its progression, we may see negative earnings growth in the 3rd quarter as well.

Stocks are likely to be subject to continued volatility. Pricing future earnings (which is what the stock market does) becomes difficult to impossible when there isn’t a clear sign as to when those future earnings will return to normal.  Bonds have also lost considerable value.  As debt instruments, there has been an increase in uncertainty about corporations and municipalities being able to carry through with their debt obligations.  With the Fed’s ability to purchase a lot of the corporate debt on the market, so far things have been relatively orderly.

Other diversifiers, like Real Estate and Commodities have similarly been hit by the stoppage in much of the industrial and economic activity.

Given the economic impact and uncertainty generated by this sudden slowdown in the economy, it can be challenging to come up with hopeful signs. However, there are a few that are helpful to keep in mind:

The measures that are being taken to prevent COVID-19 spread will eventually be able to be relaxed and likely ultimately removed.  An eventual slowing in the disease’s spread, broader testing standards, antibody testing, and ultimately immunizations will eventually start to return supply of and demand for services to normal levels.

The stimulus package is truly massive.  The CARES Act, along with the two prior stages in the monetary and fiscal stimulus program, are designed to put the economy in a state of ‘suspended animation’.  While unemployment may get to extremely high levels very quickly, we expect for the Payroll Protection Program to help moderate some of the extreme levels that could arise otherwise.  While unemployment will disproportionately rise in the obvious industries (Hotel and Tourism, Airlines and Cruises, Entertainment, Restaurants and Bars, and other Retail), an unprecedented increase in unemployment benefits over the next four months may go a long way toward minimizing the damage until these industries can hire workers back.  Many analysts predict a sharp decline in the unemployment rate as individual companies restart.

Signs are starting to show of a slowdown of coronavirus spread in areas.  China and parts of Europe have seen declines in new cases of the disease.  Sadly, the number of people in the US who are catching the disease, and the number of deaths, continue to grow, but hope that the same strategies are being deployed elsewhere will bring the US to a similar position for recovery in the coming weeks.

There should be fuel left in the tank for economic expansion, post-crisis.  The impact of the CARES Act, along with very low short-and long-term interest rates, lend plausibility to a scenario where significant gains can be made once the health crisis abates.  We also may not have seen the end of the stimulus coming from Congress.  There is much discussion of a ‘Phase 4’ package that could surpass the CARES Act in size and scope.

Opportunities still exist internationally.  While global stocks have uniformly sold off during the COVID-19 crisis, there exists a difference in valuation levels.  With US stocks (based upon the S&P 500 Index) priced at 15.4 times forward earnings, stocks outside the US (based upon the All Country World Index ex-US) are only priced at 12.3 times forward earnings.  On average, U.S stocks do tend to trade at higher multiples, but the gap is significantly larger than usual.  With Emerging markets better poised for growth, this could be a time to take advantage of opportunities beyond our shores.  And, given some economists projections that the dollar will fall due to trade considerations and stimulus-induced debt, such a direction on the dollar would improve international investing returns, on a dollar-basis.

There is almost certainly more volatility to be experienced as it is unlikely that ‘business as usual’ will return soon.  History has favored those who remain largely invested through such disruptions, while seeking opportunities to deploy assets strategically for whatever recovery eventually comes. 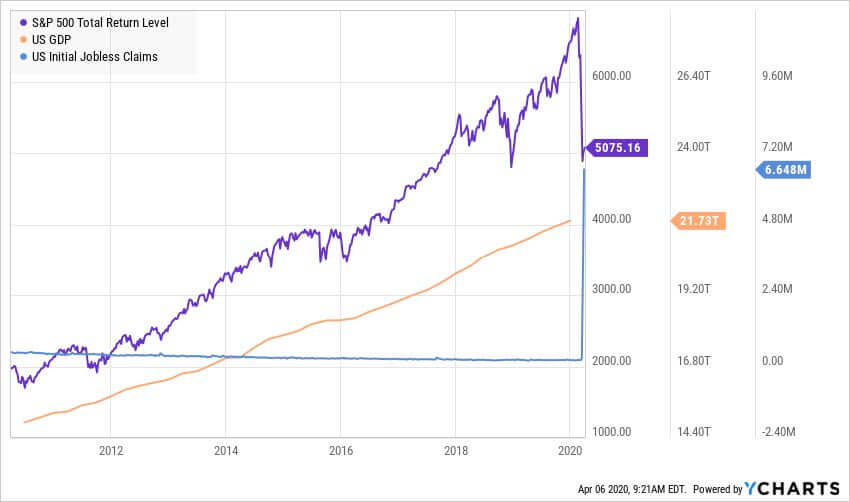 The outsized number of initial jobless claims in March is truly eye-popping.  A major condition to how quickly the economy recovers will be how long it takes for these jobs to return to the economy as economic activity begins a return to normal. 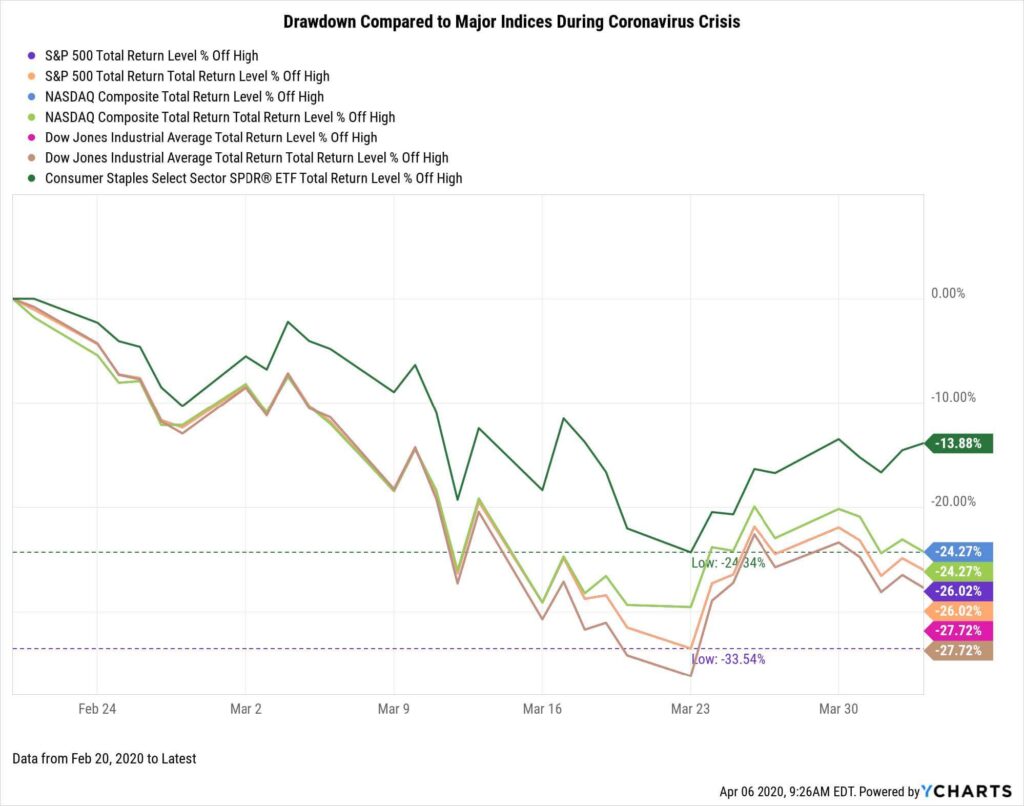 Not surprisingly, consumer staples outperformed during the early stages of this crisis.  A combination of their usual resilience and the fact that there was a great deal of ‘stocking up’ as people prepared to shelter in place, contributed to this dynamic.

Disclaimer: The foregoing content reflects the opinions of Penobscot Financial Advisors and is subject to change at any time without notice. Content provided herein is for informational purposes only and should not be used or construed as investment advice or a recommendation regarding the purchase or sale of any security. There is no guarantee that the statements, opinions or forecasts provided herein will prove to be correct.