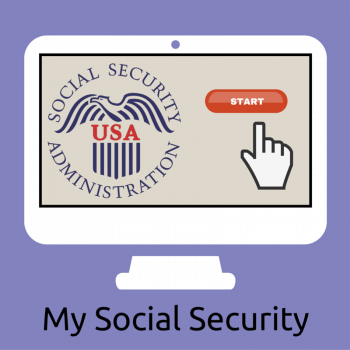 We received them annually.  They were white with green stripes, and they gave us some comfort in knowing that all of those Social Security taxes we’d paid over our lives were actually going to yield us something.  Then, in 2011, they stopped coming.

For some of us, we didn’t notice.  For lots of others, it was troubling.  There was such a backlash against it that in 2014, the Social Security Administration re-started its mailing of statements (but only every five years for those under 60).

But last year, stresses on the budgets at SSA, coupled with tight human resources (there is a backlog of over 1,000,000 people awaiting disposition of their Social Security disability claims) caused the agency to, again, discontinue the mailing of statements.

The good news is that the SSA has fully emerged into the 21st century and has vastly improved its online resources.  Thanks to “my Social Security” on ssa.gov, accessing your Social Security statement 24 hours a day, 365 days a year is easier than walking out to your mailbox.[1]

Our advice?  Go to ssa.gov and set up a mySocialSecurity account.  It’s actually really easy.  Once there, make a plan to review your statement once per year.   You can access the same friendly form, green stripes and all.  One of the major reasons to check your statement regularly is that you are the only auditor of this record.  No one else is going to make sure that all SS-eligible income is being reported.  Sure, 98 percent of earnings are reported correctly, but errors do occur.  If there is an error or an omission, you’ll want to catch it while you still have documentation to back up your claim.  Just one missing year of earnings can reduce your benefit by over $100/month for life!

Another obvious reason for checking your statement regularly is that we want that data for your financial plan.  This is an important part of your retirement income scenario.  Your benefit projection will likely vary from year to year, so keeping it up-to-date in your plan will require occasional reviewing.

Now that you’ve checked to make sure that your earnings record is accurate, keep in mind that the numbers shown on the statement are probably not the amounts that you’ll actually receive.  That’s okay, because we can still use them in planning, but why aren’t they exact?  Lots of reasons:

The statement will provide multiple estimates of your benefit.  One is at age 62, one at age 70, and one at your “Full Retirement Age”.  One thing the statement will NOT provide is any information on when is best to start taking your benefits.   Lots of considerations there, especially for married couples.

So, no need to mourn the demise of the paper statement, but consider this to be your first reminder to check your statement.  We’ll leave it up to you to decide upon how you’ll remind yourself annually going forward!

[1] Actually, if you still want to receive a paper statement, you can order one on the ssa.gov website.  Additionally, individuals over 60 years old who haven’t yet set up an account on mySocialSecurity will continue to receive paper statements until they sign up for benefits.