Was there REALLY a tax cut? 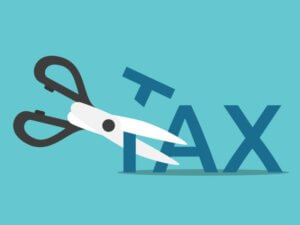 The Tax Cuts and Jobs Act of 2017 (TCJA) went into effect for the 2018 tax year. For most of us, that means we’ve just completed our first tax season under the new rules.

At first blush, it appeared to me that the vast majority of our clients would see a mild tax cut as a result of the updates to the tax code. The vast majority of folks, we found, would be in a lower income tax bracket. Even for those whose brackets went up (almost no married couples, but a large number of well-compensated singles), the lower brackets applied to the first portions of their income made up for the higher marginal bracket. Despite the elimination of the personal exemption, the increased standard deductions were going to at least leave clients with a similar deduction and, for many, increase the amount that escapes taxation. Even for those hurt most by the removal of the personal exemption (families with multiple dependent children), increases to the child tax credit generally more than made up for what had been lost on those exemptions.

The taxpayers most disadvantaged by the TCJA, as has been thoroughly covered by the mainstream media, are those in the highest property-tax states. Residents New York, Connecticut, New Jersey, California and other high property/income tax states saw that the limitation on deductibility of state and local income taxes (SALT) left a bunch of their previously sheltered income, subject to the tax bite. Interestingly, however, I’ve found that the higher the annual income of clients in these areas, the lower the negative impact of TCJA. Simply put, the impact of the lost deductions is eventually is offset by the aggregate savings from being in lower tax brackets. The 6.5% reduction (from 39.6% to 37%) in the highest tax bracket eventually puts these folks back where they were pre-TCJA (although, frankly, most of those who made up the whole difference have two commas in their annual income!)

The charts below show both the comparison of pre-and post TCJA results for both taxpayers without significant state and local taxes (whose deductibility gets limited under TCJA), and those with significant SALT taxes. While the loss of the SALT deduction removes some of the advantage that comes with TCJA, the new scheme still doesn’t leave taxpayers at a significant disadvantage when considering the overall tax obligation as a percentage of total income. This may actually overstate what has been lost because of the SALT limitations, because before the limitations, there were actually limits on itemized deduction (called the Pease limitation), and these limits no longer exist under TCJA. 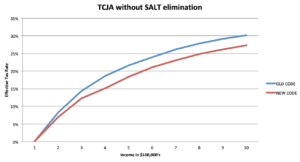 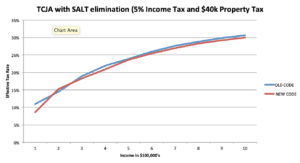 It was really an interesting tax season. To start, early filers were shocked at how much less they were receiving in refund. Many, especially those with fixed percentages withheld on things like retirement plan distributions, actually OWED money for the first time in recent memory. It quickly became conventional wisdom that filing returns this season would result in disappointment. By the latter part of the tax-filing period, expectations had become so low that people were ending up happy simply that they didn’t owe much.

Much of the blame for the disappointment this tax season came from the fact that the IRS was directed to update withholding tables in February of 2018. These tables were meant to reflect an approximation of what was owed, but that approximation was based upon the average taxpayer neither owing nor receiving a refund. Further, the new withholding tables did not take into account whether someone lived in a high-tax state.

The resulting levels of under-withholding were significant enough to put some taxpayers into a situation where underpayment penalties would be assessed. Generally, as long as a taxpayer withholds (or pays estimated payments) enough to cover at least 90% of their current year obligation, or 100% of the prior year (110% for incomes over $150k), they won’t owe a penalty. The IRS lowered the first number to 85% to limit the number of people owing penalties for under-withholding. AICPA, the accounting profession’s largest member organization, has been lobbying congress to lower that number further, providing penalty relief for anyone who has withheld 80% of their current obligation.

I suspect a lot of the people who think they paid more taxes as a result of TCJA may be actually seeing the results of under-withholding, rather than actually having a higher tax bill. Most tax preparers will be able to provide a comparison with overall tax rates from year to year, and packages like TurboTax also provide comparisons of this data over a number of years. If you’re in a situation where you find that you are not withholding enough, either completing a revised W4 OR submitting estimated tax payments can resolve that.   There really isn’t too much difference between these options. For wage earners, though, usually the W4 revision is easier, since it doesn’t require any manual sending in of payments.

And that leads to one other common misperception. For folks who DO owe income taxes at the end of the year, either their accountant or TurboTax will frequently provide a set of pre-filled estimated tax vouchers for the upcoming year. Many people I’ve spoken to are under the false impression that they need to send in these vouchers with the exact amount listed on them on the dates provided for on the voucher. In fact, you can send (or not send) any amount with these vouchers. If you are likely to have the same exact income and are otherwise withholding at the same level in the subsequent year, the estimated tax vouchers should be a reasonable estimate for what you should send along – but if there is any reason to expect that this is NOT the case, speak with your advisor and/or tax preparer.

There is plenty of debate on how good or bad this new tax code is. The vast majority of individual taxpayers, however, are paying less in taxes, whether they feel like it or not!