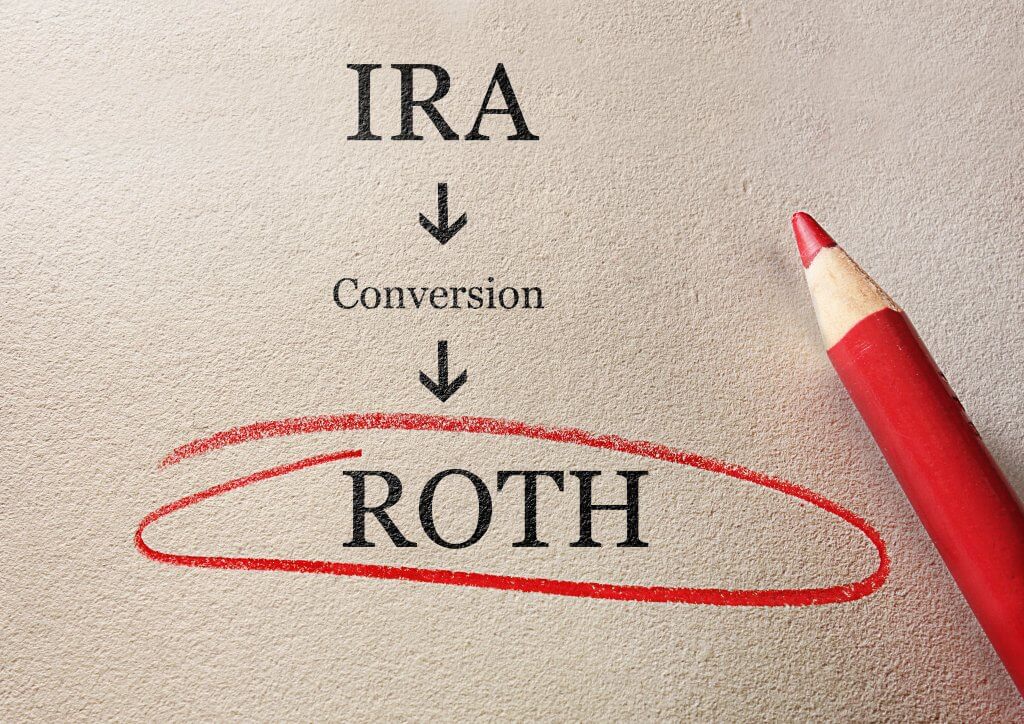 IRAs and Roth IRAs are similar in a lot of ways.  First, there are limits to how much you can contribute to each (for 2020, that limit is the greater of earned income or $6,000 – or $7,000 if you’re over 50.). There is no taxation on growth or income within the accounts, and there may be taxation when you take the distributions.

They’re also dissimilar in several ways.  First off, you may have the ability to deduct contributions to traditional IRAs from your taxable income, depending upon how much you make and whether you are covered under an employers’ retirement plan.  You can never deduct contributions to a Roth IRA.  Also, provided you hold a Roth IRA long enough and are old enough yourself, all distributions from a Roth IRA aren’t taxable as income.  The same can’t be said about Traditional IRAs.

You can convert a ‘Traditional IRA’ to a ‘Roth IRA’.  While there are income limits that prevent some people from contributing to a Roth IRA, there are no such limits for folks who want to convert a traditional IRA into a Roth IRA.  Simply put, any amount of Traditional IRA assets a person owns can be converted, and any previously untaxed amount in that conversion will be taxed in the year of conversion.  There is no additional 10% penalty for people under 59 ½ who convert.

Conversion might make sense – or it might not.  It helps to think of it like this:  Do I want to pay taxes today (by converting) or pay taxes later (by not converting)?  If I think I will be in a higher tax bracket in retirement (because I’m earning more money or because tax rates just go up), I’m likely to want to convert, pay the taxes now, and avoid paying at the higher rate.  Conversely, if I’m pretty certain I’ll be in a much lower tax bracket in retirement, paying taxes at a higher rate today by converting might not make sense.  Keep in mind, however, it’s not quite this simple.  Even if I’m expecting to be at the same tax rate later as I’m at now, conversion can be beneficial!

Conversion results in money being taxed now that would otherwise be taxed later.  But it also turns all future earnings on that money into tax-free dollars.  That’s a bonus, because instead of changing when we pay taxes, we can actually remove future growth from taxation altogether!

To determine whether someone will benefit from a Roth conversion, we consider how much someone will be able to receive, after taxes, from the converted Roth IRA.  We compare this with the amount of total distributions that would come from the Traditional IRA (after taxes) PLUS a ‘Side Account’.  This side account represents the money we would have paid on taxes when we converted but didn’t pay if we didn’t convert!  If the after-tax distributions from the Roth account exceed the combined after-tax distributions from the Traditional and ‘side’ accounts, conversion is considered.

Here is an example of that, using a person who is 53 years old and considering a $50,000 conversion to a Roth.  6% is the assumed rate of return and the assumed combined state and federal tax bracket is 30% now AND 30% during distributions:

As mentioned above, comparative tax rates between today and the future can be a big part of the puzzle.  Another one is time horizon. Generally, people with a longer amount of time between now and when they take distributions will fare better with a Roth conversion.  This is because of those future earnings that become tax-free under the Roth.  Another important consideration is where the money will come from to pay taxes on a conversion.  If the idea is to pay taxes out of the converted amount of the IRA, it’s usually NOT a good idea to convert.  Assets to pay taxes on the conversion should be at the ready, from other resources, for the math to work.

Beyond the benefits of higher after-tax income, conversion creates additional benefits.  Among those:

But watch out.  Conversions do count as income in the year you convert.  If you convert in a year when you are collecting Social Security or paying Medicare premiums, you need to consider the effect on these during that year.  Things that are helped when you take distributions can be hurt when you make the conversion.

Also, any after-tax money in a traditional IRA does not get taxed at conversion.  In fact, most people who can’t deduct contributions SHOULD convert.  But there is a ‘pro-rata’ rule that says you need to aggregate all IRAs together and determine how much is pre-tax vs. post-tax and treat any conversion proportionately.

And, one that caught me recently:  Even if you don’t have any other IRAs when you do your conversion, the calculation for the pro-rata rule takes place on the last day of the year.  This can impact taxability on conversions done earlier in the year.

Example:  Horace retired in 2019, but still had enough income to do a full IRA contribution in January.  At the time, he didn’t have any other Traditional IRA assets, so he immediately converted to a Roth, anticipating that it would be tax-free.  In July, he rolled over his 401(k) plan to a traditional IRA.  On 12/31/2019, his IRA balance was $1 million.  This renders his conversion largely taxable.

Roth conversions make a lot of sense for the majority of people I work with – but they’re rarely executed.  I’m fairly certain that’s because of the psychological aversion to paying taxes now in order to obtain an uncertain benefit in the future!  Used wisely, though, they’re a planning tool worth taking a look at!