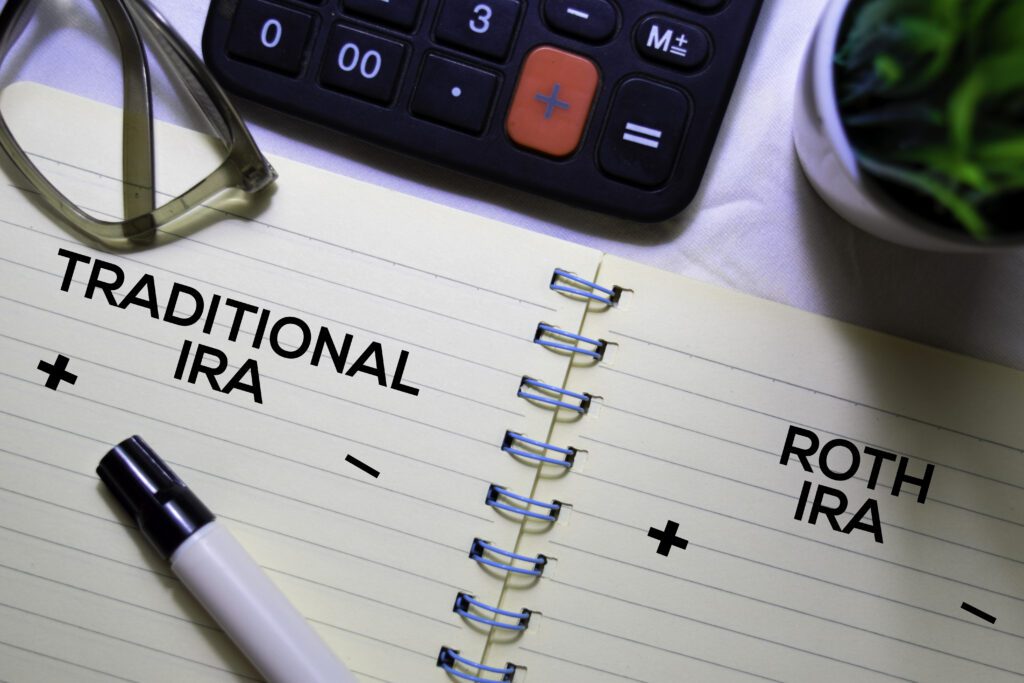 One of the first ‘new things’ I encountered in the business came as a result of the Taxpayer Relief Act of 1997.  A bill sponsored by senator Bob Roth of Delaware became part of the Act and allowed for non-deductible IRA contributions to be made to a new kind of IRA that would grow completely tax-free.

In an attempt to avoid this becoming a big tax-dodge for the wealthy (and an even bigger strain on future revenue to the federal government), income limitations were placed on taxpayers who would be eligible to select the new “Roth IRA”.  However, these limitations were significantly loosened later with the “Tax Increase Prevention and Reconciliation Act” of 2005.  Up until then, taxpayers could convert their existing IRAs to Roth IRAs only if their income (Married filing jointly or Single –didn’t matter) was under $100,000.  This limitation went away with the new act, and removed the income limitation for people wanting to convert traditional assets to a Roth IRA.

And so began a long career with hundreds (maybe thousands) of opportunities to assess the wisdom in converting a ‘traditional’ IRA to a Roth.   After many years of running the calculations, I can say without hesitation that: IT DEPENDS.

The basic concept of a Roth conversion is simple.  Pre-tax assets in a ‘traditional’ IRA that are converted to a Roth IRA are taxed as income in the year converted.  After-tax IRA assets, already having been taxed as income, are omitted from taxation.  If someone has both after-tax and pre-tax money in their IRA, any conversion must be done pro-rata (taxable and nontaxable, based on the balances in ALL of their IRAs).

When conducting an assessment of whether or not a taxpayer should convert IRA assets to a Roth IRA, we start with the assumption that money a taxpayer ‘saves’ by NOT converting should be assumed to be invested in some type of taxable ‘Side Account’.  As such, we’re comparing apples to apples:  A taxpayer who has converted has less money to start, since some of their outside wealth went to paying taxes.

The chart below shows clearly that the investor who doesn’t convert will have more money because they have the ‘Side Account’ whereas the converting investor doesn’t have this extra money.  As time goes by, and assets grow (at an assumed 8% rate both during and after retirement), so will the disparity between the two assumed pools of money. 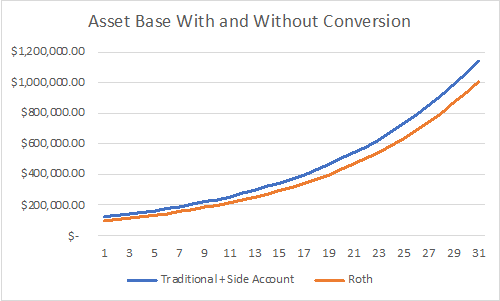 When we get to retirement, the income that can be generated over a set number of years is obviously higher with the non-converting investor – because she has more money to start out with! 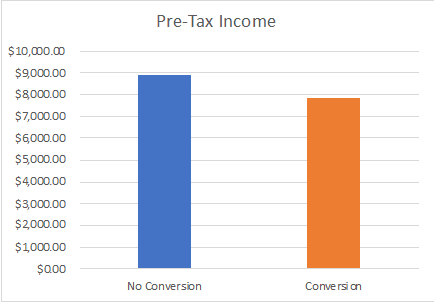 BUT… the monthly AFTER-TAX distributions (the money the investor can actually spend) ends up being HIGHER for the person who converted.  In the example charted below, the assumption is that the investor is taking this income in the same 22% bracket as when he was working, and that growth in the accumulated ‘Side Account’ is taxed at the long-term capital gains tax rate of 15%. 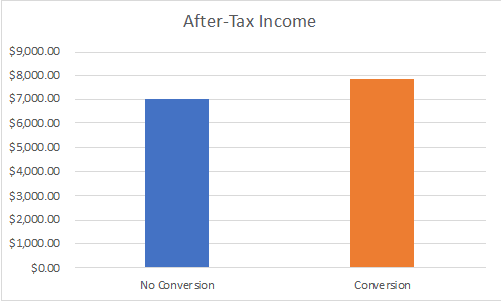 Even in situations where a lower tax rate is assumed in retirement, the conversion scenario often comes out on top.  Variables that determine this include how much lower the retirement tax rate assumptions are, how long until distributions begin, and what the growth rate is during accumulation and distribution periods.

When it’s close, I typically recommend IN FAVOR OF CONVERSION.  There are a few reasons for this:

Since every rule has its exceptions, I’ll throw that there are some situations that make me hesitant to recommend conversion.  Most of them involve situations when the IRA holder has charitable intentions.  Clearly, it makes no sense to convert an IRA when the intention is to leave it to a charitable beneficiary.  Since the charitable organization will not have to pay taxes eventually, there’s no need to pay taxes now on a conversion!

Similarly, IRA holders over 70 ½ are able to utilize the Qualified Charitable Deduction (QCD) and distribute up to $100,000 to qualified charitable organizations income-tax-free while they’re alive!  These folks, too, wouldn’t want to convert everything to Roth, essentially losing the opportunity to legally dodge taxes on their charitable giving.

If all of this seems confusing, it is.  There is no certain formula for making an unambiguous decision for or against a Roth IRA conversion.  You can, however, make sure that the deck is stacked in your favor by taking the time to consider all of the moving parts.  Your financial advisor should have tools to make this a little easier, and we’re always eager to help!

[1] Keep in mind this can work both ways:  Someone considering a conversion after starting Medicare might want to be careful because income caused by the conversion itself can result in higher Medicare premiums!