Three Reasons why Pre-Paying Your Mortgage is Getting More Popular 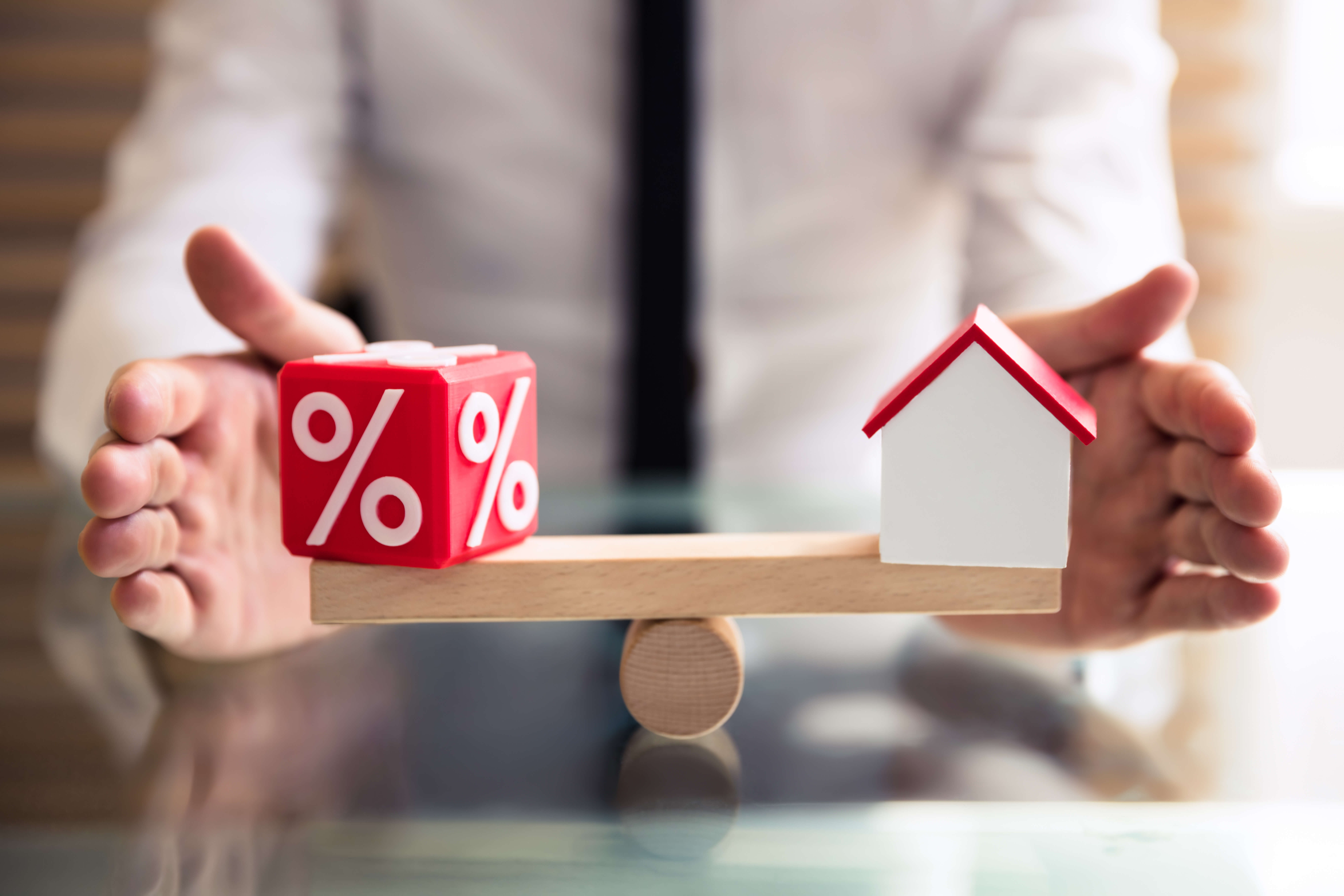 “I paid the bank note, the car note, an’ yes, I paid the ‘phone bill too
An’ then I turned around an’ I found that the house note’s due
Well, I’d love to take you out like I said I would, honey
But there’s too much month at the end of the money”

-Song by Billy Hill (made more famous by Marty Stewart)

Those who have the problem of ‘too much month at the end of the money’ can take a raincheck on this week’s blog.  This will be of more interest to those with extra cash at the end of the month.  Answering the general question about what to do with those extra assets is a core function of your Financial Planner.

One option for those with mortgages and home equity loans is to pay those down more aggressively.  Shortening a mortgage can result in big savings in the overall interest cost over the life of a loan.  The challenge, from a planning standpoint, is to accurately project interest cost savings (easy) and compare it with extra investment returns gained if cash is invested (not as easy).

Folks still need to weigh their options to invest or pay down debt, but there are three reasons why paying down debt on your house may be more of an interesting prospect than it was a few short years ago.

Reason One: The New Standard Deduction.

Under the Tax Cuts and Jobs Act of 2017 (the “TCJA”), the amount everyone can deduct from their gross income before figuring their taxes jumped significantly.  This results in far fewer taxpayers benefiting from itemizing deductions.  This simplifies the filing process for many, but it also essentially limits the tax benefits for mortgage interest for a large number of folks.

The new standard deductions under TCJA are $12,000 for single filers and $24,000 for married folks filing joint returns.  Lots of previously itemize-able deductions have been eliminated or seriously curtailed, substantially decreasing the number of folks who will itemize their deductions.  In the case of a married couple, state and local taxes are limited in deductibility to $10,000.  This leaves another $14,000 of their standard deduction to be otherwise filled with three common major expenses:  Health care costs that exceed 7.5% of income, charitable contributions and mortgage interest.  Unless the couple has a significant amount of one or more of these items to deduct, they’re likely to just use the standard deduction.

In these situations, we don’t adjust the cost of debt to account for tax savings.  As a result, an investing strategy needs to clear a much higher return hurdle to compete with the attractiveness of paying down the mortgage.

Up until the TCJA went into effect at the beginning of 2018, homeowners could deduct interest on up to $1 million in mortgage indebtedness and up to $100,000 of ‘home equity’ indebtedness.  There was no limit on how the proceeds from a home equity loan could be used – just the fact that the loan’s value was backed by the value of a residence was enough to make it deductible.

The TCJA changed this in two ways.  First, deductible mortgage interest became limited to $750,000 of indebtedness (down from the $1 million level prior, although those who already had larger mortgages were ‘grandfathered’ and they retained their deductibility.)  Second, any home equity debt that was not used for the ‘acquisition or substantial improvement’ of a qualifying residence became NON-deductible – and there was no ‘grandfathering’.  As a result, many home equity loans (and even mortgage loans that were refinanced with a cash-out) became non-deductible in 2018.  Again, this lack of deductibility increases the real cost of the debt, increasing the attractiveness of paying it off.

Since late 2016, there has been a steady increase in the cost of mortgages. 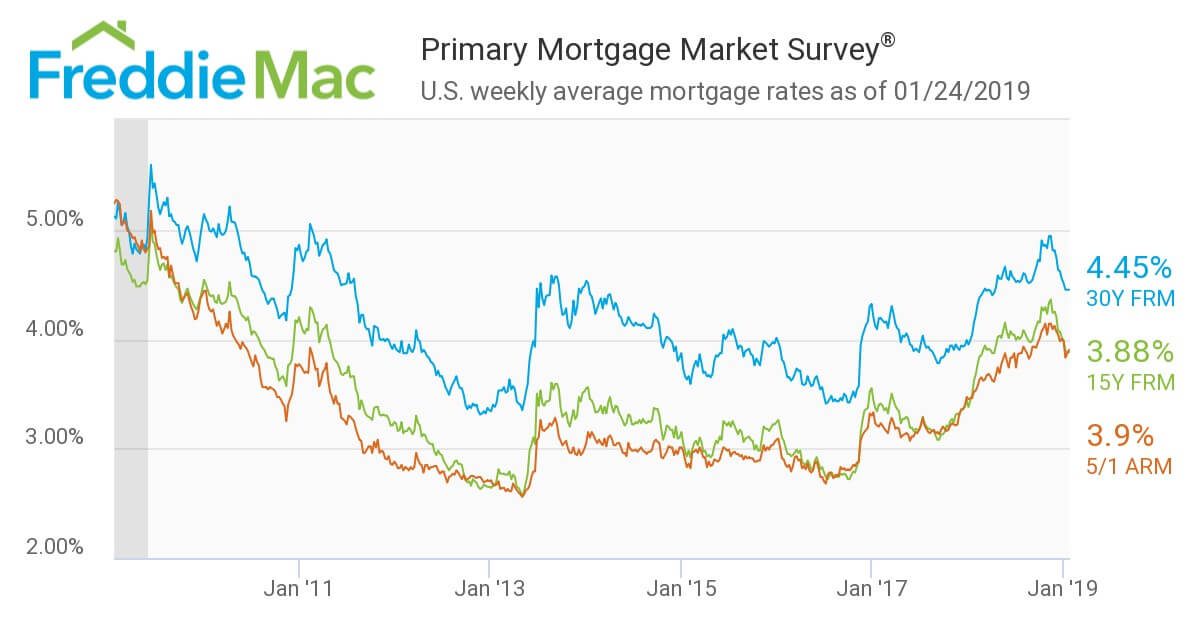 20 years ago, I routinely shared the following sage advice:  Instead of making monthly payments on your mortgage, cut the monthly payment in half and pay that amount every other week.  Since this results in 26 ‘half-payments’, which is equal to 13 full payments, you’re actually making one extra payment per year.  The conventional wisdom at the time was that this would pay down a 30-year mortgage in just over 22 years.

I was surprised when I ran that same calculation recently, and found that someone using that strategy was going to cut their term, but to just about 26 years.  Also, I calculated that paying 12 extra payments (doubling the regular mortgage payment) would finish off the mortgage in just about 11 year. But, that 26 year thing bugged me: Had the number I’d glibly thrown around early in my career been false? 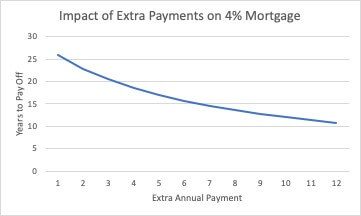 Turns out, the number was correct. The prevailing assumption 20 years ago was that a mortgage costs 8%.  Indeed, at that interest rate, an extra annual payment does shorten the mortgage to just over 22 years.  The conventional wisdom was right.   But, here in 2019 with interest rates at lower levels, the number of years the ‘extra payment’ strategy knocks off is a bit lower. 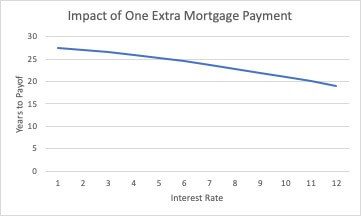 The point, however, is that the higher the mortgage rate, the shorter the mortgage will be with the ‘one-extra-payment hack.’  If rates go to 12 percent, that hack brings your time to pay down to just over 18 years!  So, since we’re in an increasing rate environment, quicker retirement of the mortgage debt will become more attractive.